A few weeks ago, I wrote a post about English words that migrated over to Hebrew and - in the process - acquired a new meaning or connotation. (In case you missed it, here’s the original post. Be sure to check out the comment section there for more great examples.)

Since then, I thought of yet another example, which, IMNSHO, really deserves its own post.

What’s unique about this particular instance of what I like to refer to as an “evolved word” is that I can’t figure out how the English evolved into the Hebrew.

Here’s how the expression is typically used:

Imagine that you’re a freelancer, living and working in Israel, and – as always - your client is in a big rush.

So s/he might say something along the following lines:

Translation: “Is there a chance that you’ll finish the work by tomorrow? We need it absolutely SOS!”

Translation: “I’d really appreciate it if you could do this SOS. It’s extremely urgent!”

So, there you have it.

Somewhere and somehow, someone out there decided to blithely ignore international maritime conventions and deliberately replaced “ASAP” with “SOS.”

And strangely enough, the replacement stuck.

So the next time you happen to be flying over a small tropical island in your propeller plane and you look down below and notice that someone used large branches or boulders to spell out the letters “S.O.S” on the beach, don’t assume that the person was shipwrecked and needs rescuing.

Instead, it’s very possible that he or she is a Hebrew speaker who simply needs a certain work assignment completed by tomorrow…

As you may (or may not…) recall, every year my mother puts together a gorgeous family calendar, and the grandchildren prepare the artwork.

And so, in honor of Shavuot, here are the Shiputzim kids’ contributions (in ascending order, according to the young artists’ ages) to the 5773 calendar: 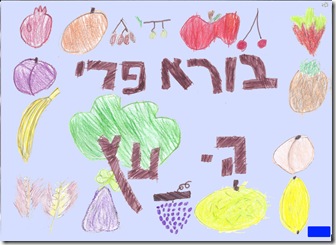 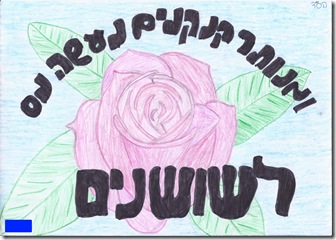 As always, please feel free to click on the pictures for a closer view.

P.S. The latest Kosher Cooking Carnival is available here. Special thanks to Ilana-Davita for including my chocolate chip cake recipe. And speaking of Shavuot and cooking, the yom tov menu here in TRLEOOB (=the real life equivalent of our blog) includes – among many other things - the Shiputzim family’s favorite cheesecake, milchig lukshen kugel, and tuna croquettes.

“And you shall place these words of Mine upon your heart and upon your soul; and you shall bind them for a sign upon your arm and they shall be for ornaments between your eyes.” (Devarim 11:18)

As longtime readers are aware, it’s been about five months BA”H since the most recent Shiputzim bar mitzvah.

However, due to technical reasons beyond my control, I was unable to post pictures of the bar mitzvah boy’s beautiful tefillin bag until today.

But now this issue has finally been resolved, and so, without further ado, here’s the lovely tefillin bag that the bar mitzvah boy’s Savta designed and needle-pointed for him: 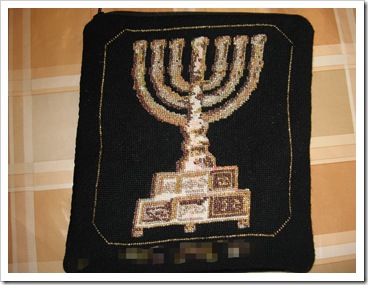 As always, please feel free to click on the picture for a closer look.

Of course, this is far from the first tefillin bag that this particular Savta made. Additional examples of her handiwork are available here and here.

May the bar mitzvah boy continue to use his tefillin in good health and happiness ad 120, and may he and each of his siblings continue to bring incredible joy and nachat to us, their grandparents, and all of Klal Yisrael.

With Yom Yerushalayim fast approaching, now’s the perfect time to listen to Udi Davidi’s stunning “Hitna’ari” (“Shake Off Your Dust”): 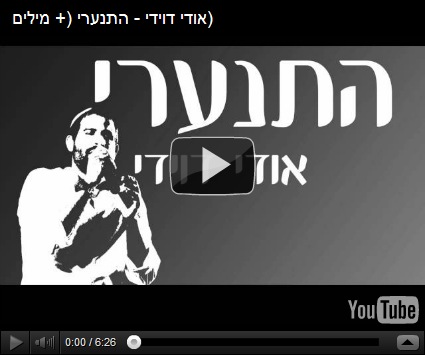 Speaking of Yom Yerushalayim, don’t forget (Emunah/Faith, this is for you… ;-)) that there are two white shirt days next week IY”H: Yom Yerushalayim on Sunday and then Rosh Chodesh Sivan on Tuesday.

And finally, in case you’ve missed them before – or even if you haven’t… - be sure to check out my in-laws’ incredible pictures of the Kotel from the summer of 1967.

“May our eyes behold Your return to Tzion with mercy.”

(From the Amidah prayer)

Heblish: The “This Is the Twentieth Edition” Edition

I know it’s hard to believe. But since blog post titles never lie, it has to be true:

This is the 20th batch of excerpts from the Official Our Shiputzim Heblish-English Dictionary!

Nearly four years ago, back when I dashed off my inaugural Heblish post, few outside the Anglo world had heard of what I then referred to as “that obscure yet utterly charming language.”

So, I’d like to take this opportunity to thank all those who generously shared their family’s own Heblish vernacular with me and thus helped me in my quest to bring this made-up language to the masses.

Also, thank you to the wonderful Shiputzim kids, who graciously ensured that I have enough material for many more editions to come…

And now, without further ado, here are today’s dictionary entries:

In koshare: Hebrew source – בכושר. English definition – In shape. Sample usage - “I don’t know how I’m going to do the bagrut in sport tomorrow. I’m not in koshare.”

To pay on it: Hebrew source – לשלם על זה. English definition – To pay for it. Sample usage - “If someone breaks something, they will have to pay on it.”

Do you have a favorite Heblishism? If so, please submit it either via the comment section below or by email to OurShiputzim at gmail dot com, and I’ll be glad to include it in a future Heblish post.

When I was growing up, my parents had Chaim Nachman Bialik’s “Shabbat HaMalkah” on LP (the younger readers amongst you can learn about records here… :-)), and we would often listen to this beautiful song on Erev Shabbat.

Here are two different recordings of this classic Shabbat song: 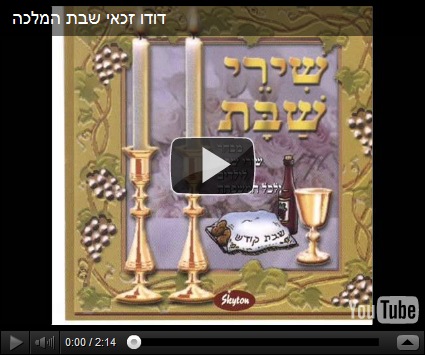 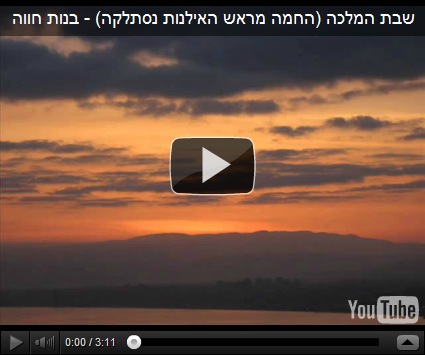 And speaking of Shabbat, if you’re looking for something new and unusual to add to your repertoire, be sure to check out Miriyummy’s, um, creative chicken recipe.

Not only does it look and sound delicious, but it obviously serves as an excellent conversation piece. And best of all, it allows the hostess to say, “All I did to prepare for Shabbat was to open a couple of cans…”

Note: If you’re looking for an intelligent analysis of yesterday’s shakeup of Israel’s political landscape, you’ve come to the wrong place. (I suggest you check out Jameel’s list of winners and losers instead.) Because the only thing I have to say on the subject is that it’s quite disappointing. I mean, here in TRLEOOB*, we were really looking forward to having a day off… :-)

It was Monday, the second day of Rosh Chodesh Iyar, and I was busy patting myself on the back over a job well done.

You see, the Iyar Challenge was underway, and by all indications, it was going to be a huge success.

I had calculated the optimal time to do laundry during the week; each of the kids knew which shirt to wear each day; and I had even managed to convince a certain young man of my acquaintance not to wear a certain shirt from his collection…

And then… [cue: dramatic music] one of the Shiputzim daughters (henceforth, OOTSD) walked in the door.

She needed a few things for her school’s upcoming Yom HaZikaron/Yom HaAtzma’ut ceremony, she told me.

Still deep in the throes of congratulating myself, I wasn’t concerned.

And so she did… 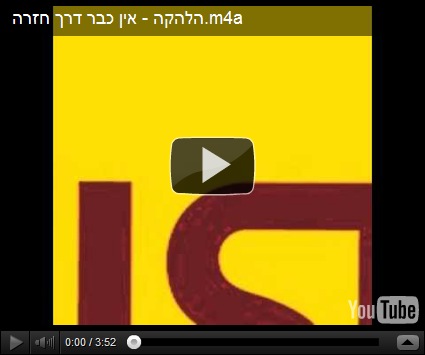 OOTSD was supposed to dress up as one of the Bilu’im, and her costume had to include a checked shirt, a straw hat or a kova tembel, and a farming or work tool.

Because while we had no trouble finding a suitable shirt and hat, I had no idea how to approach the third item on the list.

After all, we’re not exactly the kind of family that just happens to have spare agricultural implements lying around.

Especially since not just ANY agricultural implement would do. It couldn’t be valuable, because OOTSD was taking it to school. It couldn’t be too heavy, because she was going to be dancing with it.

And, most importantly, it had to pass muster with OOTSD’s discriminating teenage sister…

But fortunately, YZG – aka He Who Successfully Built a Model of the Mizbei’ach in Just a Few Hours – once again stepped in and saved the day.

After grabbing a cardboard tube and some heavy duty aluminum foil, he produced this: 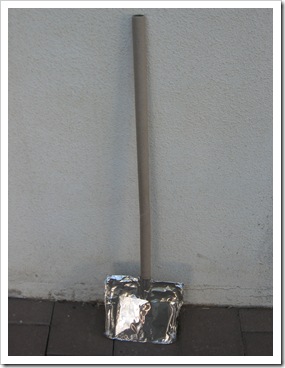 Amazingly, not only did the aforementioned teenage sister approve, but when OOTSD brought the shovel to school, her friends said that it was “magniv” (loosely, cool).

Which, by all accounts, is very high praise indeed…

Every family has their own favorite quick, easy, and deliciously moist cake that can be easily doubled and keeps well in the freezer. 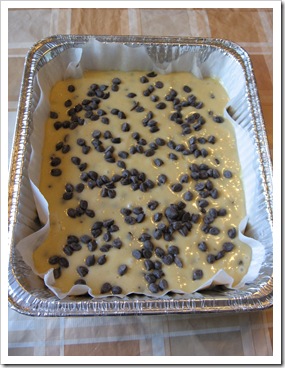 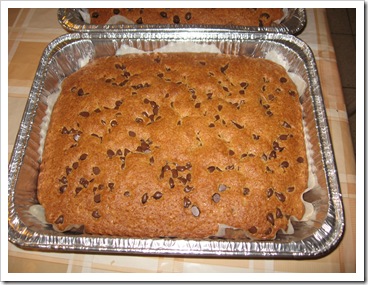 This is really just a variation of my sister-in-law’s blueberry cake recipe.

When the cake cools, you can frost it with chocolate frosting.

According to the bylaws of the powerful (yet, admittedly, nonexistent) National Anglo Bloggers Union (slogan: “taking over the country, one Heblish blog post at a time”), Anglo bloggers must - at least once during their blogging careers – write about English words that have crept into Hebrew and are now among the hardest words for non-native Hebrew speakers to understand.

Personally, I fulfilled my blogging contractual obligations over three and a half years ago with my magical post.

Nevertheless, with your indulgence, I’d like to revisit this topic and examine the specific issue of formerly-English words that seem to have acquired a slightly different meaning or connotation when they migrated over to Hebrew.

Of course, in and of itself, this isn’t really a big deal.

That is, except when Israelis try to speak English and insist on using one of the aforementioned, er, evolved words… but with its new, Hebrew connotation.

Which, needless to say, can – and often does! – lead to some a great deal of confusion.

I mean, consider the following examples:

1) סימפטי/סימפתי (sim-PA-ti) (both spellings are used) – According to some of my favorite translation software, this word is the Hebrew equivalent of “sympathetic.” However,  any good dictionary will tell you that the actual definition is “pleasant or likeable”…

3) קליפ (cleep) – It may look like “clip.” It may sound like “clip.” But, as it turns out, it isn’t [necessarily] “clip.” For instance, the video in this post is referred to as a “cleep,” even though it’s a complete video…

4) מורל (moh-RRRAHL) – This word obviously comes from the English word “morale.” But in Hebrew, it means a cheer or cheering – as in the loud shrieks and shrill cries that characterize the annual Chodesh Irgun performances and are the bane of Israeli parents’ existence…

Can you think of any other examples?