Note: I originally intended to post this before Tisha B’Av, but I had no time for blogging last week, due to various real life endeavors – including, well, keep reading to find out…

In this past Shabbat’s Torah Tidbits, Rav Leff notes that David HaMelech summarizes (Tehilim 106:24) the Sin of the Spies in three words:

This means, according to Rav Leff, “they were disgusted with the coveted land.” (The Official Our Shiputzim Hebrew-English Translator translates it as “they despised the desirable land.”)

“It stands to reason that correcting this sin and appreciating the coveted land, the land of Israel, would be a great factor in bringing about the redemption and the coming of Moshiach.”

And, thus, with your indulgence, I’d like to share yet another incredible aspect of life here in our beautiful Land:

For years, close friends and family members have been raving about this extraordinary program – the top-notch lecturers, the phenomenal and fascinating shiurim, the knowledgeable participants, and the way everything flows so smoothly and efficiently in spite of the large crowds.

Finally, this year, I was able to participate myself, and I can definitely say that the program more than lives up to all the hype.

I mean, what could be more exhilarating and inspiring than seeing so many people take time off their busy schedules to go learn Torah from the country’s leading Tanach scholars in the heart of Eretz Yisrael?

IMHO, the program’s very existence – as well as its ever-growing popularity (the organizers were stunned when the shiurim closed out well over a month in advance) – certainly qualifies as an “antidote to the meraglim!”

And on a related note, Rav Meidan, Rosh Yeshivat Har Etzion, discussed the meraglim during one of the shiurim he gave last week.

He showed that the Sin of the Spies was basically an intelligence failure. The meraglim were charged with gathering information, but they also took it upon themselves to interpret the data they had collected.

However, Rav Meidan also explained that on a more fundamental level, the Spies’ error was that they believed that returning to Egypt was a viable option.

It wasn’t until the subsequent Sin of the Maapilim that they realized their mistake. They discovered that not going to Eretz Yisrael meant staying in the hot, dry, barren wilderness for forty long years. In other words, they learned the hard way that Eretz Yisrael is the only option.

May we all soon be privileged to recognize that Eretz Yisrael is not just the only option but also the ideal option; may we learn to fully appreciate and value its significance, holiness, beauty, and uniqueness; and may our eyes behold Hashem’s return to Tzion with mercy, speedily and in our days.

Here’s a beautiful video that’s very appropriate for this time of year:

A time for introspection, reflection, and contemplation.

A time to ponder some of life’s deepest mysteries – most of which pertain to being the Anglo parent of Israeli offspring.

For instance, consider these unfathomable enigmas:

But here’s the strange part.

You see, traditionally, the game begins with a sing-song recitation of the following:

Translation: Rock, paper, and scissors./ The winner of the two./ One, two, three. (No, it doesn’t sound any better in the original…)

Which is - needless to say - long, cumbersome, and unwieldy.

And thus, ever resourceful, Israeli kids came up with a shortened version:

Yes, the literal translation of “even juk" IS “rock cockroach,” and no, I have absolutely no idea what’s the kesher. (Loose translation for the Heblish-impaired: What do cockroaches have to do with anything?)

In fact, I even tried turning to the experts - i.e. a couple of the Shiputzim kids – for help.

However, they simply shrugged and said that they “don’t know but it’s just a kitzur (abbreviation).”

Which, IMNSHO, was less of an explanation and more of a restatement of the question, but in a situation like this, one takes what one can get…

2) As if the whole jukim-as-shorthand thing is not perplexing enough, it turns out that the world the country the adolescent segment of the population is divided into two groups:

Do YOU know the answer to either of these baffling riddles of Israeli life?

Longtime readers are aware of my deep-held belief that the waning hours of a fast day should be spent blogging about food.

Here in TRLEOOB*, we like to break our fasts with soup.

This explains why several of the Shiputzim kids whiled away the afternoon preparing potato soup, and you’re all invited to come partake this evening. (It looks and smells delicious!)

But in the meantime, here’s another soup recipe, which I made for the first time for Shavuot: 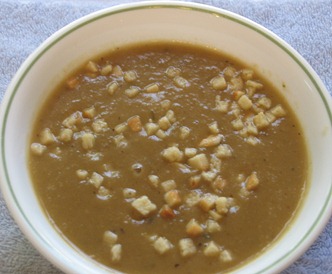 Adapted from my friend K.’s recipe, this soup even proved to be a hit with a certain so-called “anonymous” Our Shiputzim reader, who normally tries to stay far, far away from zucchini in any shape or form…

Sauté the onions in the olive oil until golden brown. Add the zucchini, and cook until they start to change color. Add the potatoes and mix through. Add the soup powder, and cover with water. Bring to a boil. Cover the pot and then let it simmer for about 30-40 minutes.

Add the cucumbers, and let it cook for another 10 minutes. Season to taste with salt and pepper.

Use a blender stick to puree. For a thinner consistency, add more water if necessary.

Garnish with croutons, and serve either hot, room temperature, or chilled.

It was early Friday afternoon.

The door opened, and, well, SOMETHING stumbled into the house.

Actually, it was a pair of somethings, to be precise.

Having had much experience in this regard, I suspected that two of my favorite people were hiding somewhere beneath the heaps of dust, sweat, and grime standing before me.

And so, I immediately directed said heaps to the shower, after instructing them to throw all their clothes into the washing machine.

Once all the layers of dirt had been scrubbed away, the arrivals indeed proved to be the two Shiputzim kids who had spent the previous few days wallowing in the mud in the machaneh (literally, camp).

In fact, amazed that two people could be so filthy, a Shiputzim teen – a longtime veteran of many a machaneh in his/her own right – wondered in surprise, “I didn’t used to be THAT dirty when I’d come home from the machaneh, did I?!”

In any event, I’m sure I don’t need to explain to you why I decided to label this a “Fatigued Friday” post - a moniker which is generally reserved here on Our Shiputzim for the day after we change the clocks in the spring.

Because if you’re the parent of Israeli kids, you’ll know that when it comes to exhaustion, “spring forward” has nothing on the day that one’s darling offspring return from the machaneh…

A while back, I discussed how the Law of Unintended Consequences impacts school uniform shirts.

Basically, I noted that in girls’ schools, uniform shirts can waste significant time every morning. (Feel free to go ahead and check out the original post for details. I’ll wait…)

But it turns out that the uniform shirts have a surprising effect on boys as well.

Namely, their supply of non-uniform shirts tends to gradually devolve into a pile of torn, outgrown rags.

I mention this interesting fact to provide background and context for the following exchange, which recently occurred somewhere in Israel:

Mother: Why are you wearing that shirt? It doesn’t fit you anymore, and it’s full of holes!

Mother: What about your uniform shirts? Why don’t you wear one of them?

Son: {shocked that his mother would even SUGGEST such a horrible thing} I’m not wearing a uniform shirt!! It’s vacation!!

Mother: {naively} Why not? After all, the only difference between uniform shirts and non-uniform shirts is that the former have a logo. What does it matter if your shirt has a logo on it?

Son: {thinks fast} It would be a chillul hakodesh! [Ed.- literally, “a desecration of holiness”]

Son: {with a straight face but a mischievous twinkle in his eye} Yes!

Mother: {knows that she’ll regret asking but steps right into it anyway} You mean that since you wear the uniform shirts to learn Torah in yeshiva, it would be a chillul hakodesh to wear them during vacation to hang out with your friends?

Son: {grins} No. I mean that it would l’challel the kedushah [Ed. – Heblish for “desecrate the sanctity”] of the summer to wear shirts from school now…

Mother: {laughs} You DO realize that I’m going to put this conversation on my blog, right?