Out of this world

Have you ever heard people say that their memories are so bad that they’re likely to forget their own names next?

Well, apparently, that’s what happened to the producers of this Havdalah candle: 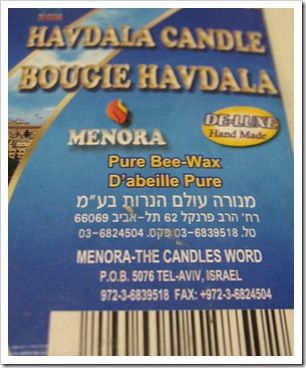 Someone should tell them that the missing letter in their company’s name makes a word, er, that is, a world of difference…

P.S. The latest Kosher Cooking Carnival is available here. Special thanks to Batya for including my chocolate chocolate chip bars.

Member of the tribe

Unfortunately, due to her semi-anonymous status, we’re unable to point our cameras directly at her. In fact, I can’t even tell you her real name.

But I can tell you that I’ll be providing a live, play-by-play description as she attempts to perform what can only be described as a truly HISTORICAL feat.

You see, as I stand here and watch, Mrs. S. hopes to become one of the only bloggers in the WORLD to discuss Chodesh Irgun* for the fourth year IN. A. ROW!

[Ed. note – See the bottom of this post for a brief explanation of Chodesh Irgun.]

Can she do it? After all, not only has she already written about the ooltra, the sleepless nights, the paint-splattered clothing, and the generation gap, she’s even shared many of Chodesh Irgun’s secret underpinnings. (See here, here, and here for details.) Is there really anything left to talk about?

Let’s watch closely and find out:

Five words: Standing according to the shvatim.

Maybe this only happens in our community, but more often than not, during Chodesh Irgun’s dramatic climax – i.e. the big ceremony where the new shevet receives its name* - the parents are asked to arrange themselves according to their own shvatim (age groups).

After the requisite joking (“I’m don’t belong here with the middle aged people. I belong over there with the twenty-somethings!” :-)), the Israeli parents good-naturedly line up behind the appropriate sign with their shevet’s name on it.

Which, naturally, means that the oleh parents – especially those, like YZG and me, who didn’t grow up in Bnei Akiva – are at a complete loss and end up awkwardly on the side, feeling foolish.

And, for the record, looking the names up on the Internet in advance doesn’t help.

Because inevitably, as the hapless Anglo parent tries to nonchalantly head on over to what Google insisted was the correct shevet, the following exchange ensues:

Well-meaning Israeli: {kindly} “Are you sure you’re in Shevet X?”

Hapless Anglo: {hesitantly} “I think so…”

Well-meaning Israeli: {taking charge} “How old are you?”

Hapless Anglo: {actually answers question, much to his/her own surprise}

Well-meaning Israeli: “Well, then, you should be in Shevet Y, over THERE.” {points}

Hapless Anglo: {thinks to self} “Hmm. This will make an excellent blog post…”

{breathlessly} And there you have it, folks! Four consecutive years’ worth of blog posts about Chodesh Irgun! Is that amazing or what?! History in the making!! {surreptitiously wipes away a tear}

I now return you back to the main studio…

*Chodesh Irgun in a nutshell: Chodesh means "month”, and irgun literally means "organization". But in this case, irgun refers to a youth movement. Most youth movements (or at least the religious-Zionist ones) dedicate one month a year - usually around MarCheshvan - to what is essentially a month-long color war or competition between the different shvatim (age groups). Chodesh Irgun culminates with Shabbat Irgun, and on Motzai Shabbat Irgun, the oldest shevet (i.e. the ninth graders) receives a permanent name.

2) Maya has some great tips for getting what you want in Israel. (Mazal tov to Maya and her husband on the birth of their baby daughter!)

5) Batya discusses the future of the Jerusalem Light Rail.

Top 10: On the Road to the Bar Mitzvah

The Our Shiputzim Editorial Board proudly presents:

10) The entire family is able to lain a certain parsha by heart.

9) Whenever anyone opens their mouth to say anything, you immediately caution, “slow, loud, and clear.”

8) The baking team (aka the tza’ir bakers, in the vernacular) is hard at work.

7) Supper is now a thing of the past, because the dining room table has long since disappeared under an avalanche of invitations and envelopes.

6) You’ve been contacting obscure relatives, in order to ascertain: (a) that they still exist, and if so, (b) their current mailing address.

5) There’s no more room in your freezer.

4) You’ve compiled so many lists that you’ve been working off a list of lists. In fact, you’re seriously considering migrating to a database of lists.

3) If nonstop shopping was an Olympic sport, you’d be well on your way to a gold medal. (Reason #3221 for making aliyah: You don’t have to buy your son a suit or even a tie for his bar mitzvah…)

2) You find yourself trapped deep inside the dreaded Cycle of Invitations. {cue: wild, maniacal laughter}

(In the interest of full disclosure, I should note that a close family member is currently one of Rav Rakeffet’s talmidim at the Gruss Kollel in Yerushalayim and that YZG is a huge fan of Rav Rakeffet’s recorded shiurim.)

A talmid of both Rav Soloveitchik and Rav Aharon Kotler, Rav Rakeffet talks about his childhood in the Bronx, his time in YU and Lakewood, his work as a pulpit rabbi and a magid shiur in YU, and his various activities here in Israel – including his considerable efforts on behalf of Soviet Jewry.

On a related note, I had the privilege of attending an event at Gruss - held in honor of Natan Sharansky, soon after he was finally released from the USSR and arrived in Israel: 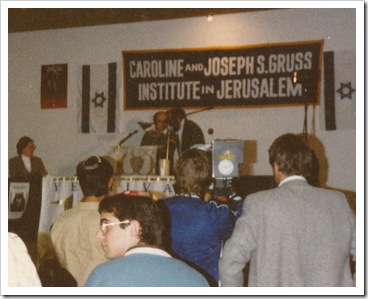 Sharansky is up on the dais, on the left

3. The latest Haveil Havalim is available here. Special thanks to Susan B. for including my most recent Heblish post.

Most people consider Twenty Questions to be a rather prosaic parlor game, but in our family, it has a long and colorful history.

You see, my father is notorious for coming home on Friday night and beginning the Shabbat meal by daring everyone at the table:

“You’ll never guess who was in shul tonight. Twenty questions…”

And so the game begins.

Inevitably, the subject proves to be an obscure, random person – that nobody, often not even my mother, has ever heard of or has even the remotest chance of ever guessing…

When the Shiputzim kids were born, YZG and I knew that Twenty Questions was a tradition we wanted to incorporate into our own household.

And so we have. With a vengeance.

For Twenty Questions features prominently in TRLEOOB (=the real life equivalent of our blog).

Of course, the older kids have a definite advantage. Not only do they have better analytical and deductive skills than their younger siblings, but they know more people.

Still, even the younger members of the family hold their own.

For instance, a few years ago, the kids were trying to guess who it was that YZG and I had bumped into at a wedding we had attended.

Everyone was asking a series of well-reasoned questions, in order to gradually tease out clues as to the subject’s identity.

Suddenly, ACYSC (=a certain younger Shiputzim child) - who was feeling somewhat left out and wanted to get in on the action - memorably blurted out:

“Did the person die yet?”

In short, there’s much to like about Twenty Questions.

After all, it promotes cognitive development and encourages logical thinking.

And more importantly, Twenty Questions is the perfect game to play when checking for nits in one’s offspring’s hair…

Heblish: The Everywhere You Look Edition

I’ve said it before, and I’ll say it again:

Nobody – no, not even the J-Blogosphere’s [self-proclaimed] Expert On All Things Heblish (yes, that WOULD be me…) – is immune from allowing Heblish to creep into one’s speech… or even into one’s blog.

It was only several hours after I hit “publish” that I realized that ACSD’s paragraph about her favorite place contains a glaring Heblishism:

A lot of times: Hebrew source – הרבה פעמים. English definition – Often; frequently. Sample usage - “I like it, because a lot of times all my cousins are there.”

As you can see, Heblish is everywhere you look.

For example, here are two more mainstays of the Heblish dialect used by the Shiputzim family:

Year on top: Hebrew source – שנה מעל. English definition – A grade above; a year older. Sample usage - “She’s not in my class; she’s older than me. She’s a year on top of me.”

Help in: Hebrew source – …עזרה ב. English definition – Help with. Sample usage - “I don’t understand what I’m supposed to do here. Could you please help me in the second problem?”

And finally, Toby recently shared a picture of a Heblish-infused traffic sign:

Before you: Hebrew source – לפניך. English definition – Ahead. Sample usage - “New traffic arrangements before you.”

Do you have a favorite Heblishism? Please submit it either via the comment section below or by email to OurShiputzim at gmail dot com, and I’ll be glad to include it in a future Heblish post.

We briefly interrupt this blog to bring a bit of nachat to one of our readers:

ACSD (=a certain Shiputzim daughter) recently had to write a short paragraph about “My Favorite Place” for her dovrei Anglit class.

On the assumption that ACSD’s grandmother, who also happens to be a longtime Our Shiputzim reader, would enjoy it, I asked ACSD if she would let me post it, and she graciously agreed.

My favorite place is my grandparents’ house in [CENSORED]. I like it because a lot of times all my cousins are there. Another reason is I like playing with my grandmother.

We now return you to your regularly scheduled blog…

P.S. The latest JPiX is available here. Special thanks to Leora for including my Palmachim Beach post and my Beit Guvrin post.

“On 3 MarCheshvan, we [begin] requesting rain. Rabban Gamliel says: On the seventh [of the month], 15 days after the festival [i.e. Succot], in order that the last one in Israel can reach the Euphrates River.” (Mishnah – Taanit 1:3)

“R’ Elazar said: The halachah is like Rabban Gamliel.” (BT Taanit 10a)

B”H, much of Israel is enjoying rain tonight, the 7th of MarCheshvan, which is when Israelis begin reciting “V’Tain Tal U’Matar L’Vrachah” in the Amidah.

And as the Our Shiputzim Baking Staff (aka the tza’ir bakers, in the vernacular) can tell you, a rainy Friday is the perfect time to prepare a quick, easy, and yummy dessert for Shabbat: 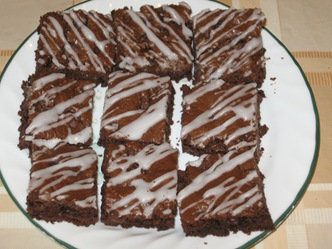 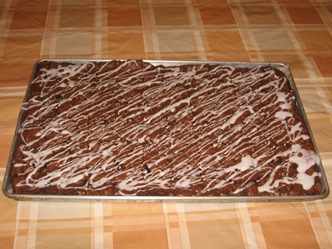 Spread dough in a baking-paper-lined rimmed cookie sheet (AKA a jelly roll pan). Bake at 375 degrees for 20-22 minutes or until set. Cut into bars immediately, and let cool in pan.

Prepare glaze, and drizzle over the bars in the pan. 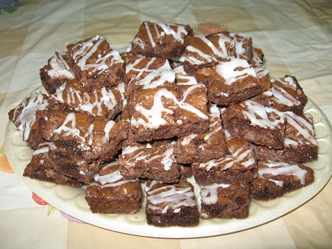 P.S. Our Shiputzim is now on Facebook. Check out www.facebook.com/OurShiputzim, and be sure to like the page.