How I Spent My Summer Vacation

Ever since the dawn of time, come the first week of the brand new school year, teachers – for reasons best known to themselves – inevitably feel that what the world DESPERATELY needs is yet another batch of literary masterpieces entitled, “How I Spent My Summer Vacation.”

Unfortunately, however, their students never seem quite up to the admittedly daunting  challenge of condensing two glorious months of fun and freedom into a couple of dull and boring sentences.

<brief interjection> I strongly suspect that when my parents read this post, they’ll ask me, “Why didn’t you write about the tuna?” And so, before they do – and with your permission – I’ll recount this ancient tale of woe.

According to family legend*, back when I was about 7-8 years old, I [allegedly] reduced a vacation packed with trips, outings, and countless activities to the following:

How I Spent My Summer Vacation

We went to visit my grandparents. We bought tuna fish there, because it was cheap.

*At the advice of counsel, I will neither confirm nor deny this story…

Yet, oddly enough, no one ever asks the parents to describe what THEY did during the vacation.

Which is a shame, really, because most parents would undoubtedly enjoy sharing their valuable tips for making it through the annual endurance test that is summer vacation spending wonderful quality time with their delightful offspring.

For instance, Gila has an ingenious solution (i.e. a pahTENT, for the Hebraically-oriented amongst you) she likes to call  “Next Safety”.

Meanwhile, here in TRLEOOB (=the real life equivalent of our blog), we prefer a more low-tech approach and instead rely on a tried-and-tested system* of automatic parental responses to frequently asked questions.

Here’s how it works:

How did YOU make it through YOUR summer vacation?

(On a related noted, be sure to check out this JPost essay about the end of summer vacation.)

*Satisfaction is not guaranteed. Void where prohibited.

The Kotel through [some of] the ages

Warning: The following post exceeds the recommended daily allowance for controversial topics. However, if you make it through the boring opinion stuff at the beginning, there are some cool pictures at the end…

It’s like a game of Mad Libs gone terribly wrong.

Each of these fictional organizations their real-life counterparts insists that it represents the Ultimate TruthTM; that the other guy started it; and that its members are the poor, misunderstood victims of the story.

But speaking in the name of the sane, silent majority*, I say that we don’t care.

*<explanation>”Speaking in the name of the sane, silent majority” is a social media term, which can be loosely translated as: “I feel a certain way, and therefore, that gives me the right to ascribe my views to the rest of the world and to condemn those who dare to disagree with me.” </explanation>

Nevertheless, we very much DO care that thanks to their combined efforts, going to the Kotel has become an unpleasant experience for countless women (your humble blogger included).

Of course, to be fair, these groups are not the only ones at fault.

Much of the blame goes to the ever-shrinking size of the women’s section at the Kotel; the Kotel’s ever-rising mechitzah; and the ever-growing barrier separating the Kotel itself from the plaza behind it.

All of these are unfortunate yet very recent developments. Indeed, up until about a decade or so ago, the Kotel plaza looked very different.

But you don’t have to take my word for it. Instead, check out the following Shiputzim family photos from over the years, and be sure to click on the pictures for a much better view.

First, an historic picture from the summer of 1967, when there was no barrier at all: 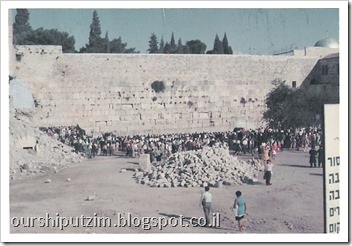 See my Kotel 1967 post for more incredible pictures from this period. 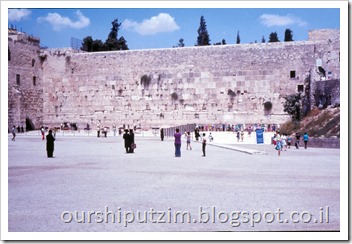 As you can see, the front of the plaza is now separated from the back with two metal chains strung from a series of short posts. 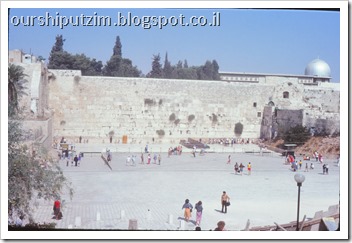 There now appears to be a row of low, movable barriers behind the chains. 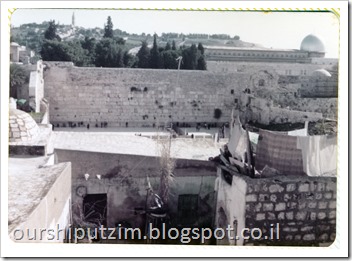 The chains have been replaced by a series of short walls, with spaces in between. 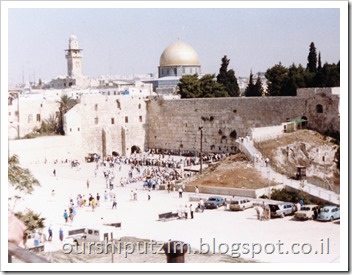 It’s hard to make out either the barrier or the mechitzah, but clearly they’re both low enough that people can look over them.

Unfortunately, I don’t have any recent pictures of the Kotel plaza (or at least, none that would pass muster with this blog’s Director of Security), but a whole bunch of photos are available over at a Mother in Israel’s blog, here and here.

In conclusion, I should stress that this post is meant neither to bash anyone nor to generate negativity. My point is simply that not very long ago, the Kotel experience was much more positive and uplifting for women, and there’s absolutely no reason why it can’t be recreated.

Your thoughts? Please keep it civil. Thanks!