It’s nearly midnight. Do you know where your high school seniors are?

I ask, because if it’s on or about Rosh Chodesh Adar, chances are said 12th graders are off somewhere working on the all-important Hachtarah.

What’s a Hachtarah, you ask?

Well, to answer that, I suppose we should consult that scholarly classic, namely, The Official Our Shiputzim Adar Lexicon (2010), which includes the following definition:

Hachtarah (הכתרה) - Literally, coronation or inauguration. Basically an elaborate Purim shpiel, but also the event at which the Rav or Rabbanit Purim is crowned.  In most schools, this is considered to be the highlight of the senior year.

Now, far be it from me, a mere blogger, to argue with such an authoritative and well-regarded reference work as the aforementioned Adar Lexicon, but although this definition is technically correct, I’m not sure that it fully conveys the Hachtarah’s magnitude or significance.

That is, I believe that when the lexicon was originally published, the author was then the mother of a then-yeshiva high school senior.

In other words, the author obviously had no firsthand experience with a Hachtarah in an ulpanah, and as a result, she clearly did not realize that in an ulpanah, the Hachtarah is less “elaborate Purim shpiel” and more what is referred to in Orthodox Jewish girls’ high schools in the States (or in the New York area, anyway) as the “Production.”

In my own quaint, out-of-town school, we called it simply a play or a musical – without a capital letter…

Needless to say, a major theatrical event such as the Hachtarah requires weeks and weeks of preparation - including writing scripts, rehearsing scenes, building sets, sewing costumes, choreographing dances, and so on.

Which, in educational terms, translates to almost no classes from Rosh Chodesh Shvat, countless all-nighters, exhausted girls, and bemused parents.

And of course all this happens just as the girls are interviewing for Sherut Leumi and even taking one or two of the Bagruyot.

But, as they say, the show must go on, and so, we here at Our Shiputzim extend our best wishes to all the performers and eagerly look forward to what promises to be a great night!

A is for apple

Question: What should you do when your kids baked mini black and white cookies, and now you have a container of leftover lemon-flavored glaze in the refrigerator? 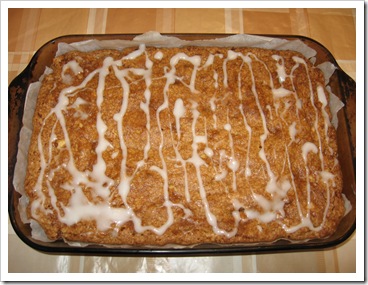 Mix sugar and oil. Beat in eggs. Mix in vanilla and dry ingredients.  Add apples and mix through.

Prepare glaze and pour/spread over cake. 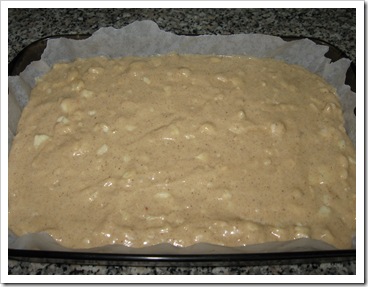 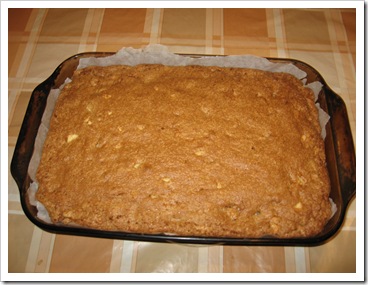 P.S. The latest Haveil Havalim is available here. Special thanks to Susan for including my Sherut Leumi (National Service) post.

According to the forecasts, Israel is about to experience what’s being billed as the Storm of 5772, which is supposed to include freezing cold temperatures, heavy rain, and – most significantly – even snow in many parts of the country.

Apparently, the main event will happen on Shabbat, but by last night and throughout the day today, we’ve had a few glimpses at what we can expect over the weekend.

Think of it as a frozen coming attraction: 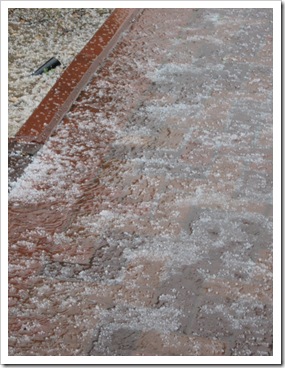 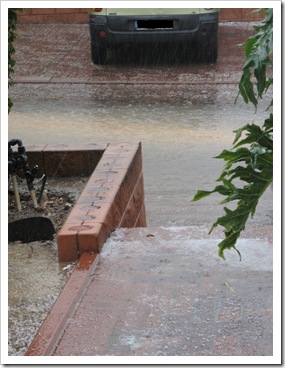 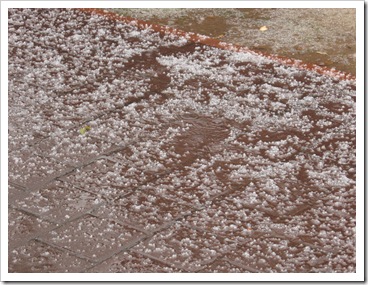 Yes, that’s hail (i.e. barad for the Hebraically-oriented amongst you).

May we all enjoy a wonderfully wet – and hopefully white – weekend!

The Parental Guide to Sherut Leumi

By all accounts, Sherut Leumi (National Service) is generally a rewarding and enjoyable experience for the young volunteers.

But the application process the year before?

Well, that’s a completely different story. An absurd, ridiculous, and downright inane story. A story that often involves disappointment, frustration, and even tears.

A story that begs for a blog post of its own…

And thus, we here at Our Shiputzim proudly present:

Shministit (שמיניסטית) – Literally, one belonging to the shminit – i.e. the eighth. Refers to a high school senior (fem.). The term is actually a vestigial throwback to the gymnasia system. The first form was the equivalent of today’s fifth grade, and the final – or eighth – form corresponded to today’s twelfth grade.

Agudah (אגודה) – Literally, an association. Refers to one of the Sherut Leumi supervisory organizations. There are currently three primary agudot which cater exclusively to National-Religious young women. Each agudah has a separate catalogue of Sherut Leumi positions throughout the country. (Although three agudot may seem like overkill, competition between the three actually benefits the bnot sherut.)

K’sherit/Megasheret/Mekasharet (קשרית\מגשרת\מקשרת) - Literally, a liaison. (Yes, there are – at least – three different names for the same thing…) Refers to the agudah’s representative who comes to the ulpanot and helps the shministiyot figure out what they want to do during Sherut Leumi. Each agudah sends its own mekasheret, and thus the shministiyot have to meet with all three mekashrot. The mekashrot are often young and inexperienced (our neighbor’s 21-year-old daughter currently works as a mekasheret in a local ulpanah) and tend to come up with rather amusing suggestions for the girls. (I’ll leave it to A Mother in Israel to elaborate…)

Popular positions – Certain Sherut Leumi positions are considered to be highly desirable. This reputation is largely undeserved and is based solely on hearsay. In practice, this means that shministiyot applying to any of these positions are likely to face rejection…

Sayaret (סיירת) – Literally, a reconnaissance tour. The shministiyot go on sayarot in order to check out potential positions and to be interviewed. Each institution is only allowed to invite a limited number of candidates to a particular sayeret. The precise number is determined by the number of tkanim.

Dirat sherut (דירת שרות) – The apartment where the bnot sherut live during their Sherut Leumi year.

Rakezet (רכזת) - The local coordinator or supervisor who takes care of the bnot sherut and the dirat sherut. The rakezet is employed by the agudah.

Website – Where the shministiyot must register for most of the sayarot (except for the ones that require preregistration, advance registration, and/or special invitation…). Registration begins at a specific time on a specific day. In recent years, it’s been at 6:00 PM on a given Tuesday. Which means that starting at 5:30 PM on that fateful day, girls across the country sit in front of their computers, hands hovering above their keyboards, as they wait anxiously for H-Hour to arrive - so they can quickly register for a sayaret at one of the popular positions before all the spots fill up.

“We upgraded our system, and it won’t crash.”- A statement made by an agudah official to a group of parents at a certain ulpanah earlier this year. Note that she said this without the slightest hint of irony – even though this is exactly what the agudot insisted last year… and the year before that… and the year before that… Also note that this year, out of the three agudot, only one’s system did in fact crash – and was down for over two hours - on that critical Tuesday evening: The very same agudah whose official made the aforementioned claim…

“What a crazy system!” – A phrase uttered repeatedly by, er, a certain Anglo mother of my acquaintance over the past few months…

What would you add to this lexicon?

And in conclusion, this blog’s editorial board and writing staff would like to take this opportunity to extend a hearty mazal tov to our favorite shministit, who recently, um, closed on (sorry, but the English just doesn’t have quite the same connotation as the Heblish…) a very exciting position for next year IY”H.

Best wishes to her and her classmates for continued success in all their future endeavors!

Leora asked a number of Israeli bloggers – including yours truly - to share some thoughts on Tu B’Shvat. Here’s what I came up with:

Growing up in the States, Tu B'Shvat was simply a day to eat (or, more likely, NOT to eat... :-)) a bit of tasteless dry fruit - typically, the ubiquitous and rather unappetizing "bukser" (dried carob) – and perhaps sing a few listless rounds of “Eretz Chitah U’Se’orah,” a song extolling the Shivat HaMinim (the Seven Species):

“A Land of wheat and barley and grapevine and fig and pomegranate; a Land of oil-producing olives and date-honey.” (Devarim 8:8)

But here in Israel, Tu B'Shvat is so much more than that. </reason #7811 for making aliyah>

Tu B’Shvat is also the day when kids across the country head outdoors and plant trees, and it’s the day when many families celebrate lovely Tu B’Shvat Seders.

But mainly, Tu B'Shvat is a time to appreciate Eretz Yisrael and its myriad incredible blessings.

It’s a time to thank Hashem for the privilege of living here in this beautiful Land and having the ability to fulfill the mitzvot hat’luyot baAretz (a special category of mitzvot which can only be observed in Eretz Yisrael).

On most days, we’re so busy living life that we forget to stop and recognize all the amazing wonders which surround us here in Israel.

Tu B’Shvat is a perfect opportunity to do just that.

For more Tu B’Shvat reflections, be sure to check out Leora's post.

TSG had to write a position paper for school on the pros and cons of belonging to a youth group (i.e. a tnu’at no’ar, for the Hebraically-oriented amongst you).

She graciously offered to translate it into English so that I could post it here on Our Shiputzim.

Take it away, TSG!

Written and translated by TSG

Here are some reasons for and against youth groups.

I have reasons for and against, but I think that it’s good to go to youth groups.

Thanks, TSG, and great job!

The Resident Ulpanistit’s Day Off

Just about two years ago, I blogged about the fact that Israeli high school seniors have almost no classes during the second half of the school year, and I noted that, ironically, a certain then-senior spent a weekday afternoon watching Ferris Bueller's Day Off.

Fast forward to the past couple of weeks, when a different high school senior of my acquaintance – namely, the Resident Ulpanistit - has been going on “sayarot” (i.e. going on interviews for Sherut Leumi (National Service) for next year IY”H) and, as a result, has missed quite a few days of school.

And in the meantime, watch this space for a full post about the Sherut Leumi application process in all its absurd, inane, and completely ridiculous glory.

B”N, I hope to finish said post as soon as the Resident Ulpanistit, well, “closes on” (if you’ll excuse my Heblish) a specific position…

While addressing the Knesset plenum, MK Gilad Erdan, Israel’s Minister of Environmental Protection, directed his remarks to one of the Arab MKs and quoted the beautiful and well-known first Rashi on the Torah: 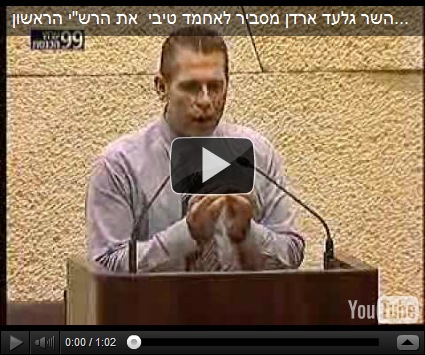 Here’s the full text and a translation* of this amazing Rashi:

“‘In the beginning’ – R’ Yitzchak said: It was not necessary to begin the Torah but from, ‘This month shall be for you,’ (Shmot 12:2) which is the first commandment which Israel were commanded. And what is the reason it opened with, ‘In the beginning?’ Because, ‘The strength of His deeds He related to His people; to give them the inheritance of the nations.’ (Tehilim 111:6)

*The above translation is courtesy of the Official Our Shiputzim Hebrew-English translator. Please note that she’s available for translation work. For more information, contact me at OurShiputzim at gmail dot com, and I’ll gladly forward all serious inquiries to her.