What we’ve been up to

Seeing as how I’ve been shamelessly neglecting this poor blog (for a change…) in recent weeks, you’ve probably been wondering what the Shiputzim family has been up to.

Here, then, are a number of vignettes, which should give you some idea of what’s been going on here in TRLEOOB*:

The Ulpanistit: [walks in the door at about noon]

The Ulpanistit: [surprised at the silly question] “Because we got our report cards today!”

The Ulpanistit: [can’t believe that her mother is this ignorant] “So we NEVER finish after twelve on the day we get teudot…”

Me: [reluctantly concedes defeat and chalks this up to #yetAnotherThingI’llNeverUnderstand]

Me: [makes a sarcastic comment about the Shminist’s countless free periods]

The Shminist: “It’s your own fault, you know. Don’t forget that you’re the one who paid extra for me to take dovrei Anglit classes and do the 5-point English bagrut in 10th grade.”

The Shminist: “Well, you should thank the yeshiva. They threw in two years of free periods at no extra charge…”

Me: [knows that there’s something wrong with his logic, but just can’t put my finger on it]

Certain Shiputzim Child: “We have a peulah in fifteen minutes, and I need to bring a chatif.”

Me: “Why did you wait until the last minute to tell me?”

Certain Shiputzim Child: [indignant] “I didn’t wait until the last minute! It’s just that I only remembered about it now…”

What has YOUR family been up to lately?

How to eat a pomelo in eight easy steps

The following originally appeared nearly three years ago, and since then, it continues to be one of the most popular posts on this blog. In honor of Tu B’Shvat, I figured a repost was in order. (You can also see more of the fruit in TRLEOOB* here and here.)

The Our Shiputzim Step-By-Step Guide to Eating a Pomelo

As always, please feel free to click on the pictures for a better view.

Step 1: Head on over to your nearest pomelo tree: 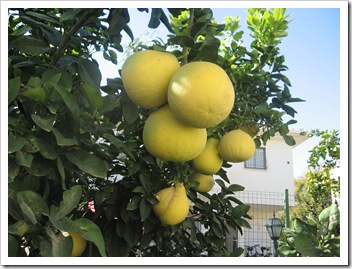 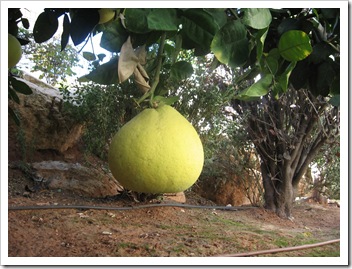 Step 3: Bring the fruit inside; wash well; and use a knife to score the skin: 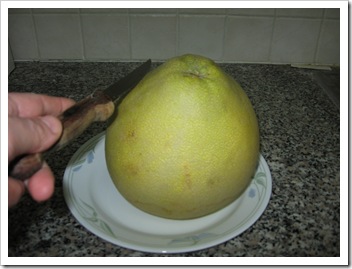 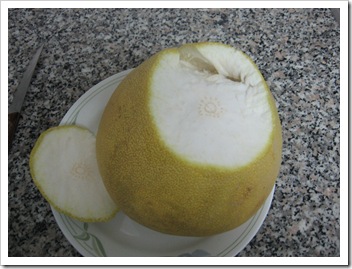 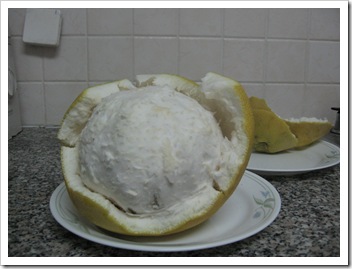 Step 6: …Until all the skin has been removed: 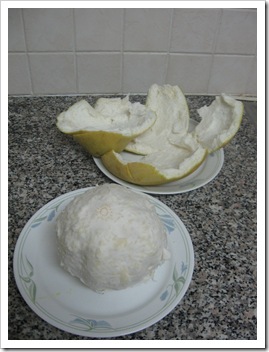 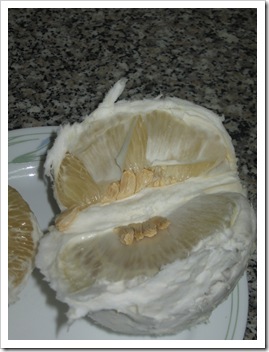 Step 8: Eat only the sweet yellow flesh - NOT the bitter membranes between the segments: 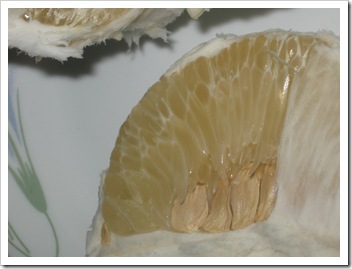 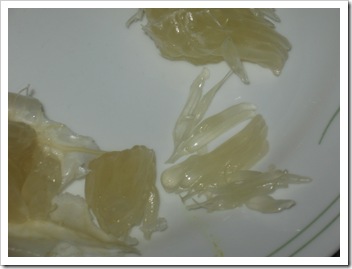 Warning: The following post may exceed the recommended daily allowance for long, drawn-out tales of, er, woe and suffering. Proceed at your own risk.

I have many fond memories of my college years.

But registering for courses is certainly not one of them.

It all started with my first semester at Stern. Incoming students signed up for courses after all the upper classmen, and due to the vagaries of the alphabet, I was one of the last students in the entire school to register.

Which meant that by the time my turn came around, the pickings were fairly slim.

I still shudder when I recall running up and down the stairs between the registrar’s office and the computer room, where a large monitor displayed all the closed courses. (“What do you mean EVERY section of freshman composition is closed?! How can I be closed out of freshman comp?!! I’m a freshman!!”)

Desperate, I had no choice but to ignore my mother’s cardinal rule.

The key to a successful college career, she had declared, was to push off taking the dreaded speech class (a general requirement for all Stern students) until one’s senior year, in hope that the academic powers-that-be would somehow be inspired to change the requirements and allow one to graduate without it.

(The fact that speech was still a requirement nearly two decades after my mother had graduated Stern should have been my first clue that the strategy was doomed to fail. But I digress…)

But since there wasn’t too much else left to take that first semester, I was forced to sign up for speech.

(Postscript: The silver lining was that during our senior year, when all my friends were groaning their way through speech, I had the smug self-satisfaction of knowing that I no longer had to deal with that misery. But once again I digress…)

But B”H, in the intervening years -  during which time I graduated college; YZG and I got married; we made aliyah; I started a blog; I neglected that blog; and so on – I was gradually able to come to terms with my, ahem, ordeal.

You see, I was secure in the comforting belief that technological advances would ensure that the Shiputzim kids would be spared the same registration trauma.

Fast forward to two weeks ago, when the Studentit called home in the middle of the day.

Registration for the spring semester had just opened, and she was having trouble registering. Could I please help her, she wondered.

Suffice it to say that although the Studentit attends an internationally-acclaimed institution of higher learning, which boasts some of the country’s finest engineering and computing minds, she and I spent the next two hours glued to our respective computer screens, as the supposedly sophisticated online registration system crashed ignobly right before our very eyes.

It seems the French may be on to something with their whole “plus ça change, plus c'est la même chose” thing (i.e. אֵין כָּל חָדָש תַחַת הַשָמֶש – for the Biblically-oriented amongst you).

Well, here’s hoping that the registration system improves by the time  the Shiputzim grandchildren (BA”H) are ready for it…