But never on a Sunday

It’s Motzai Shabbat (i.e. Motza”Sh for the acronym fans among you).

You recited Havdalah; your Shabbat guests packed up, said their goodbyes, and left; and your Shabbat dishes were washed, dried, and put away.

And now, you can sit back and relax, because your weekend is only half over---

{cue: sound of blog post coming to a screeching halt}

Because if you live here in Israel, your weekend is just about over.

After all, Sunday is the first day of the work/school week, and so now’s the time to focus on things like picking out clothes for the morning, packing lunches, and organizing schoolbags.

But relief may be in sight, because a number of activists and politicians have recently proposed that Sunday become a day-off from work/school.

“According to the proposal, Saturday and Sunday will be official days of rest while Friday will become a half day work-wise...and an extra 30 - 60 minutes would be added to Monday to Thursday's workdays.”

Overall, I think this is an excellent idea.

Because as it stands now, Election Day is pretty much the only chance we have to schedule family get-togethers, trips, or casual outings.

And since it’s probably not in the national interest to have Election Day more than once every couple of years, it would be really nice to have a weekly equivalent (albeit without the government falling and the entertaining political commercials…).

But I have to admit that one aspect of this new proposal concerns me.

Under the current system, most professionals don’t work on Friday – hence, the popular saying:

“Even in chu”l (the Diaspora), they have Shabbat, but it’s only in Eretz Yisrael that we also have Erev Shabbat…”

There’s nothing as amazing as an entire country spending the day preparing for Shabbat – each person in his or her own unique way.

And while it’s true that one can certainly manage to get everything done on Thursday night – as we used to do, before we made aliyah - it’s just not the same.

Back in my corporate America days, I’d usually eat lunch at my desk during the winter months. It was the only way I could make up the hours, so that I could leave at a semi-reasonable time on Friday.

Meanwhile, YZG would rush home every Friday - just in time to jump into the shower before dashing off to shul.

I can’t say I miss any of that.

So, I guess the question is:

Would having Sundays off be worth the price?

What do you think?

P.S. The latest Haveil Havalim is available here. Special thanks to Esser Agaroth for including my most recent Heblish post.

Dedicated member of the online world that I am {ignores the snide comments about how I shamelessly neglect my poor blog}, I felt that it was only right that I join Google Plus as soon as I received an invite* a couple of weeks ago.

And since I know that you’ve all been anxiously waiting for my take, here goes:

Within seconds of signing up, I realized that my life had changed forever. Google+ is precisely the app I’ve always wanted…

Conventional wisdom apparently holds that it’s a great improvement over Facebook**, but I honestly don’t understand why.

I’m obviously missing something, because I just don’t get it. </politically-incorrect confession>

What’s your opinion of Google+?

*Please feel free to send me an email if you’d like an invite.

**For comparison’s sake, here are my initial impressions of Facebook.

Welcome back to Name. Thaaaaat. Country!

As you saw, before we headed out to the commercial break, our exciting final round ended in a tie, and so we’ll have a lightning round as a tiebreaker.

Are you ready, contestants?

{contestants try not to look as nervous as they feel}

We’re going to show you two items, and then the talented “Name That Country!” Players will act out another scene.

Afterwards, you’ll have a mere 15 seconds on the clock to correctly name. thaaaaat. country!

And, of course, we’ll provide those of you playing along at home {blows a kiss in the direction of the camera} with extra clues, which will appear on your TV screens during the round.

Please look at the monitor, where you’ll see two emails which were each posted on a community email list somewhere in the country we’re talking about.

(Loose translation: “One of my relatives is looking to buy a Hyundai Trajet 2002-2005. If you know of such a car, I’ll be glad to forward the information to him.”)

And the second one:

(Loose translation: “Our friends want to purchase a Mitsubishi Space Wagon. Does anyone know of one that’s for sale?”)

[Clue #1 – The potential buyer, rather than the seller, is the one doing the advertising.]

Can you name. thaaaaat. country! yet, contestants?

{contestants, who look more worried than ever, attempt brave smiles}

Well, don’t worry, because we still have a scene for you, which takes place in {consults card} a parking lot.

Man: {parks and gets out of his car, which appears to be about 2-3 years old}

Random Stranger: {approaches Man} How does your car drive? Are you happy with it? How many miles per gallon kilometers per liter does it get?

[Clue #2 – The man doesn’t mind that he was accosted by a complete stranger.]

Man: {gladly answers all the questions}

Random Stranger: Would you like to sell it to me?

Thank you, “Name That Country!” Players!

And now, contestants, you have fifteen seconds…

Have an easy and meaningful fast, and may all the fast days soon be transformed into festivals and days of joy.

Back in the 20th century – i.e. in the pre-NBN era - the oleh rights were structured such that it made financial sense to ship all of one’s household electrical appliances from one’s country of origin.

Typically, this usually involved a shopping trip to one of the numerous 220-volt appliance stores located on New York’s Lower East Side, where one could purchase everything one needed… and, inevitably, also an appliance or two that one didn’t.

After all, when purchasing that many big-ticket items at once, it was very easy to get carried away.

And, so, before you knew it, you found yourself buying something which you never owned before, but which you were sure you were going to use all the time in Israel.

Which explains our sewing machine, another family’s shortwave radio, and a third’s bread machine…

While the owners of the aforementioned shortwave radio have never even pretended that they’re ever going to use it, I still maintain (to YZG’s great amusement) that someday, I’ll find the time to figure out how to work our sewing machine. {ignores YZG’s snickers in the background}

And the bread machine?

Several years ago, its owners graciously loaned it to us, and they’re always glad to hear that the Shiputzim kids enjoy using it to bake delicious loaves of bread: 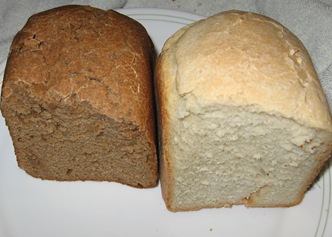 Our our relatives’ machine yields two small loaves, and one can use different recipes for each one.

Adapted from the manual which came with our our relatives’ machine

Heblish: From the mailbag edition

Below is a sampling of the, ahem, “actual” letters we receive here at Heblish headquarters every day:

Help! Summer is here, and my kids are home all day. I love them dearly, but we don’t seem to speak the same language! Please post a new Heblish definition - so I can communicate with my children!

You’re in luck, because guest blogger Malke submitted just the thing for you. Enjoy!

I gather that you spent two years in Israel as a child. Did you yourself speak Heblish? Perhaps this is the source of your obsession fascination with Heblish?

Wondering on the Web

Hmm. You may have a point.

You see, reader Yaffa (who recently spent a Shabbat with her lovely family here in TRLEOOB*) sent in the following classic Heblishism:

(BTW, Yaffa suggested that this phrase may actually be used colloquially in British English. Would any of my British readers - or those of you who are married to Brits - care to chime in?)

In any event, this entry brought back a  long-repressed memory from my childhood:

My brother and I couldn’t understand what caused our parents to burst out laughing when we explained why we were home so late from the pool.

And then, we were very surprised to learn that we weren’t speaking English…

You’ve translated both Mah Nishtanah and Megilat Esther into Heblish. Why not try your hand at a popular movie?

Funny you should ask, because just a few weeks ago, one of the Shiputzim kids was overheard channeling The Princess Bride:

In other words, let me explain. No, there is too much. Let me sum up…

Thank you, everyone, and please keep those wonderful Heblish submissions coming!

Cooking in the J-Blogosphere

1) The latest Kosher Cooking Carnival is available here. Special thanks to Yosefa for including my homemade vanilla post.

2) Leora has a wonderful collection of simple summer salad suggestions. (Try saying that five times fast…) Special thanks to her for including my lemon cucumber salad. (Tip: This cucumber salad works best with freshly-squeezed lemon juice.)

As you may recall, every year my mother prepares a beautiful family calendar.

And so, in honor of Rosh Chodesh Tamuz, here are the Shiputzim kids’ contributions (in ascending order, according to the young artists’ ages) to the 5772 calendar.

As always, please click on the pictures for a closer view: 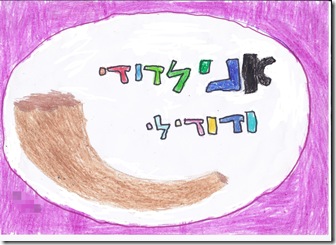 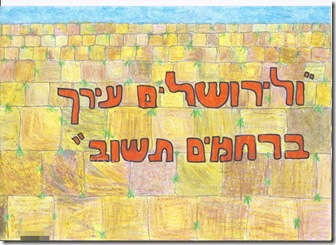 July 2012 (roughly corresponding to Tamuz-Av 5772, including the Three Weeks)