1) In honor of today’s royal wedding, Seraphic Secret explains how Grace Kelly’s wedding dress was crated and shipped from LA to Monaco – an account which blends fashion and engineering and is thus likely to appeal to the eclectic tastes of this blog’s most veteran readers. (And yes, I confess that I did watch the wedding today. {thrusts chin out defiantly} In fact, I remember watching William’s parents’ wedding on a small black-and-white TV – coincidentally, also from Israel…)

2) Miriyummy has a moving post about being the daughter of Holocaust survivors.

3) Ruti Mizrachi’s son writes about living in our beautiful Land.

Happy Blogiversary to me!

Here in TRLEOOB*, Isru Chag is not only the day we hold our breaths as we wait to discover which chametz utensils were irretrievably swallowed up into the pre-Pesach void as well as the annual kick-off of Gebrochts Week, but it also marks Our Shiputzim’s third Hebrew blogiversary. (Tomorrow is the secular date.)

In honor of this most auspicious occasion, here are some of the more amusing searches which led to this blog:

Here’s to another year!

But as longtime readers are aware, here in TRLEOOB (=the real life equivalent of our blog), we collect national parks.

And so, seeing as this is chol hamo’ed and all, the extended Shiputzim family headed off to Ein Chemed National Park today.

Ein Chemed is a tributary of Nachal Kisalon, and the park includes Crusader ruins, a playground, a short trail, and several scenic picnic spots.

In addition, this week, there’s a so-called “Fairy Tale Festival” at the site – with appearances by Peter Pan, Captain Hook, a witch, Rapunzel, and several other characters.

The festival is definitely geared for younger kids, but since it gave the teenagers a chance to grumble – and thereby raised the all-important KQ (the kvetching quotient) – everyone was pleased… :-)

Here, then, are some pictures of the site:

First, the requisite shot of the price list – to show how much money we saved as a result of our National Parks Authority membership: 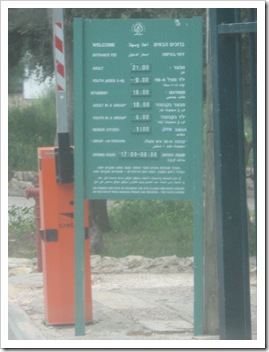 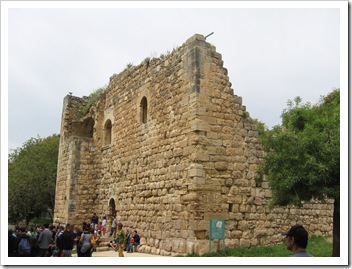 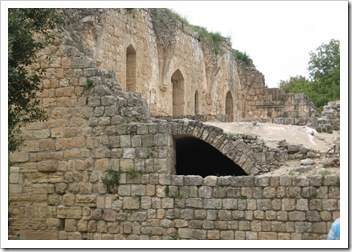 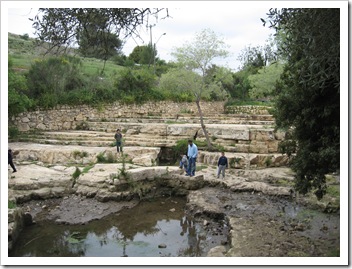 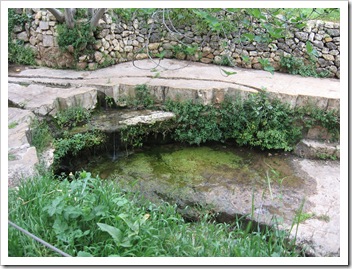 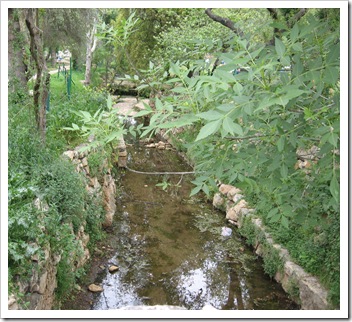 As always, please click on the pictures for a closer view.

What have you been doing during Chol Hamo’ed Pesach?

Looking for advice in all the wrong places

Everyone knows that making Pesach is like planning a military campaign.

It all began innocently enough.

Reader HR (Hi, HR!) was looking for a non-gebrochts brownie recipe and turned to Be-All-You-Can-Be for advice.

At this point, I should perhaps remind you that Be-All-You-Can-Be is not only the official Our Shiputzim military advisor, but he also happens to be quite the maven about wind turbines.

But, apparently, when it comes to Pesach recipes, Be-All-You-Can-Be’s expertise fails him.

For, you see, he mistakenly assured HR that I had a very good potato-starch-based brownie recipe – when, in fact, this is very much NOT the case.

After all, here in TRLEOOB*, we make our Pesach brownies with matzah meal (albeit without water).

Thus, the lesson for us is twofold:

On a related note, our Baker-in-Chief (aka the Resident Ulpanistit) made Pragmatic Attic’s non-gebrochts chocolate cake this year to rave reviews: 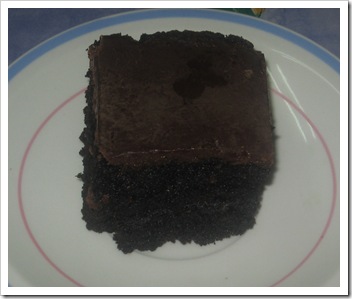 The Resident Ulpanistit frosted it with the chocolate berry glaze, which appears at the end of the post.

And finally, no discussion about non-gebrochts desserts would be complete without mentioning Mimi’s amazing Chocolate Covered Lemon Almond Macaroons. (The Resident Ulpanistit whipped up a double batch for Shabbat Chol Hamo’ed, and you’re all invited to come taste for yourselves...)

1) It’s an age-old question: What to serve for lunch on Erev Pesach?

After all, one can no longer eat chametz, but matzah isn’t yet an option either.

Was this the entire menu? I don’t remember, but perhaps some of our more veteran readers can chime in? (Hint, hint…)

In any event, here in TRLEOOB*, we generally partake of things like gefilte fish, tuna fish, or even yogurt – with, of course, that highly-traditional Erev Pesach delicacy: KashLa”P potato chips. (Yes, I am sure that “traditional” means what I think it means. Why do you ask? ;-))

What does your family eat for lunch on Erev Pesach?

2) Earlier today, we were discussing how if Mashiach comes – as we fervently hope and pray he will – in the next 24 hours, we’ll IY”H be privileged to enjoy the Korban Pesach and have our Seder in Yerushalayim.

This prompted one of the younger Shiputzim children to wonder, “Will we stay by strangers?”

The entire Our Shiputzim staff wishes all our readers a very happy and kosher Pesach.

May we all be privileged to eat in rebuilt Yerushalayim from the zevachim and from the pesachim, speedily and in our days. Amen.

There’s nothing like Pesach to get one’s competitive juices flowing.

As I explained last Pesach:

After all, no matter where you turn, you’re sure to hear someone asking:

Yet this year, the whole Pesach one-upmanship thing is being raised to an entirely new level here in our neighborhood.

It all started about three or four weeks before Purim (!!), when a series of odd emails began appearing on our local mailing list.

One after the other, people were soon posting requests for empty houses and/or apartments for their Seder guests.

Which was blogably (which may or may not be a real word…) amusing in its own right.

Did all those people somehow suddenly forget that we live in a country where it goes against our national ethos to make plans that far in advance??

But the funniest part was that once it became clear that the housing demand would likely far exceed the housing supply, people panicked and started hyping their guests.

“Our guests have no small children,” one family boasted.

“Our guests have no children at all,” a second family bragged.

And then it got personal.

“Our guests are mesudarim v’achra’im (neat and responsible),” a third family played the trump card.

[I was really, REALLY hoping that someone would write: "Our guests are irresponsible slobs who will wreck your house about five minutes after they arrive." But, sadly, it was not to be… ;-)]

Now, I have no idea whether or not any of the prospective hosts found housing.

But I can tell you that the Guest Promotional Campaign Competition (that’s the GPCC, for short) apparently continues.

Are people still looking for housing for the Seder in your area?

Gebrochts for the rest of us

Having the CTO home from yeshiva for bein hazmanim (yeshiva vacation) means that:

As I may have mentioned in passing never let YZG forget, we don’t eat gebrochts.

However, as I noted in my original gebrochts post:

“We’re not fanatic about no gebrochts. Basically, the only thing we avoid is matzah mixed with water. Other liquids are fine. For instance, [we] make Pesach rolls with not-from-concentrate orange juice…” 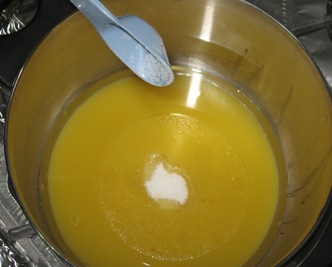 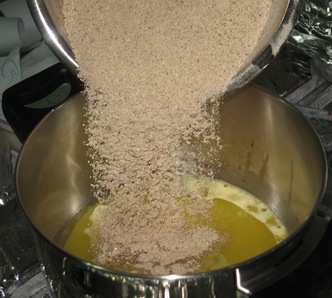 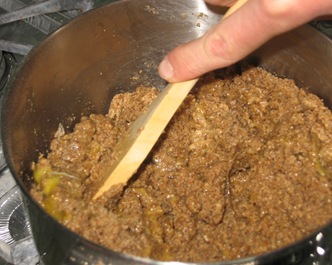 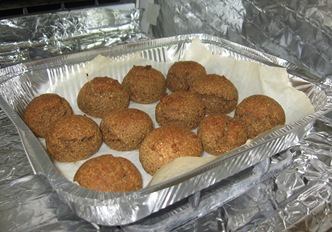 These rolls  taste best when warmed up in the microwave and served with generous amounts of butter and are also good for taking along on chol hamo’ed trips.

Put oil, juice, salt, and sugar in a pot, and bring to a boil. Remove from heat, and immediately add the matzah meal. (Have it prepared in advance.) Mix well with a heavy wooden spoon. Add eggs, one at a time, and beat well between each addition. Add baking powder and mix through.

Notwithstanding my oft-cited Pesach schedule, this time of year isn’t exactly conducive to blogging. And so, in lieu of an actual post, here are a few more blogbits:

1) Condolences to A Mother in Israel on the loss of her father z”l. After getting up from shiva last week, she wrote up some helpful tips. May she and her family be comforted among the mourners of Tzion and Yerushalayim.

Last week, YZG and I went to a wedding at the same Yerushalayim hall and with the same mesader kiddushin (officiating rabbi) as this wedding.

This meant that last week’s chupah (ceremony) was just as beautiful and moving as the previous one – albeit with two main differences:

3) If you need a quick break from your cleaning, check out this very funny (and rather intellectual) Purim prank over at G6’s blog.

4) Here in TRLEOOB*, today is Annual Move Into Our Springtime Succah Day.

5) Not coincidentally, today is also the day we turn our living room rug upside-down and keep it that way until the end of the week IY”H - in hope that gravity will do its thing on at least some of the dust. </amusing only in Israel scene>

We now return you back to your regularly scheduled Pesach preparations…

2) Jameel posts fascinating photos of Israel in the 1960’s.

3) Leora painted a lovely street scene, which some of you (especially some of the more veteran readers) might recognize.

4) As always happens this time of year, “potato kugel” – or some variation thereof – has been the most popular search term leading to this blog in recent weeks. And so, for those who are interested: Here’s my potato kugel post.

5) The latest Kosher Cooking Carnival is available here. Special thanks to Phyllis for including my hamentashen post.

6) And finally - on the off-chance that you haven’t seen it yet - here’s a cute video that’s been making the rounds: 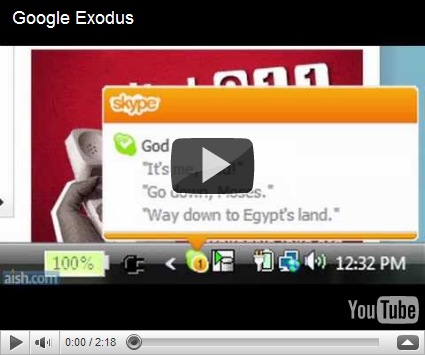