By now most of you have probably seen my in-laws’ incredible pictures of the Kotel from the summer of 1967 – i.e. just a few weeks after the Six Day War. (If you missed the photos, be sure to check them out here.)

Well, I recently discovered that my paternal grandparents z”l spent Pesach 1967 – i.e. just BEFORE the Six Day War – in Israel and took their own amazing pictures of Yerushalayim.

As always, I highly recommend that you click on each of these historic photos for a much better view.

First, two pictures of my bubby z”l standing in front of the Mandelbaum Gate (the former checkpoint dividing Yerushalayim), which was torn down immediately following the war: 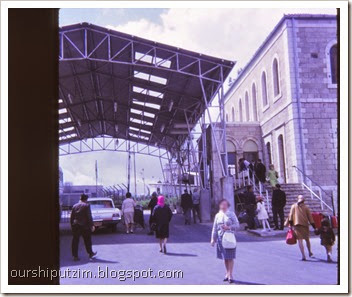 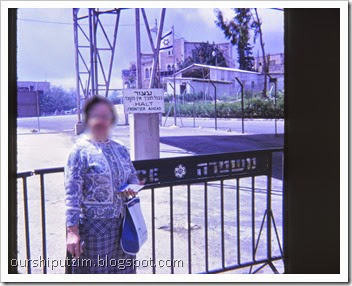 Next, a view looking up Rechov Agron toward the intersection where King George Street becomes Keren HaYesod Street: 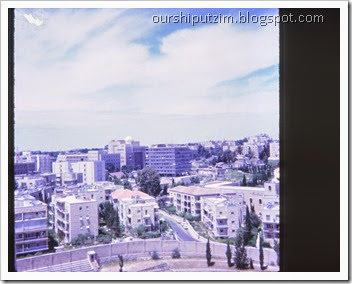 Note that modern landmarks such as the Plaza Hotel and the Great Synagogue did not yet exist in 1967.

As you can see in the next picture, Heichal Shlomo, which was only nine years old at the time, still had no neighbors: 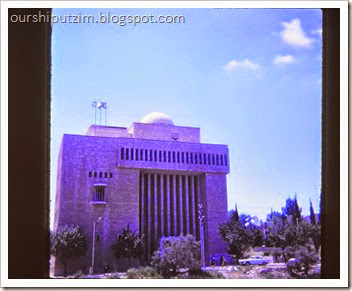 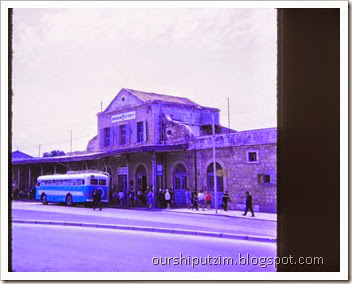 Looking over the King David Hotel toward the walls of what was then the Jordanian-occupied Old City: 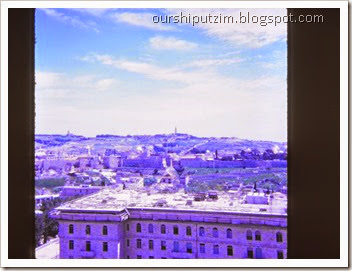 Little did anyone know that within a matter of weeks, Yerushalayim would be miraculously reunited, and the Old City would once again be accessible to all. No longer would the Jewish People have to gaze at the heart of the city from afar.

A view of Migdal David (the Tower of David) and Shaar Yafo (Jaffa Gate): 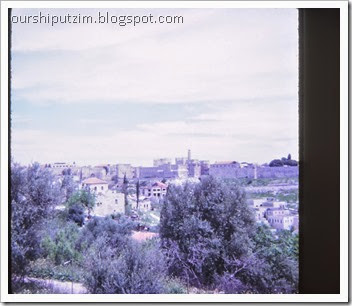 And finally, two views from Har Tzion (Mount Zion) – which remained in Israeli hands after the Jordanians seized control of the Old City in 1948 - looking back toward the Windmill and Yemin Moshe: 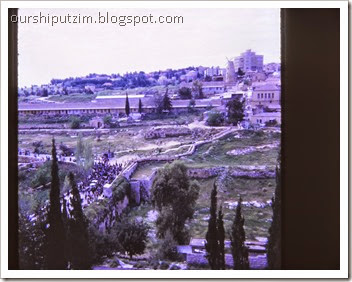 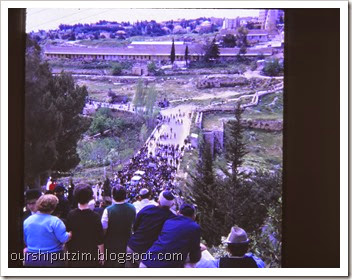 Apparently, my grandparents z”l took part in some sort of festive procession (a hachnasat sefer Torah?) leading up to Har Tzion.

The following exchange may – or may not – have occurred yesterday somewhere in Israel:

Israeli Son: {comes home after finishing the bagrut in Tanach}

Anglo Mother: So, how was it?

Israeli Son: {annoyed} It was easy!

Anglo Mother: {confused} And why is that a problem?

Israeli Son: Because I wasted all that time studying for nothing!

Anglo Mother: {naively} Maybe the reason it was easy was BECAUSE you studied?

Israeli Son: {wonders for the upteenth time where his mother gets these crazy ideas}

Disclaimer: Any resemblance to actual events is purely accidental intentional.

Recently, ACSD (=a certain Shiputzim daughter) had to write something about “challenges” for her school’s English newspaper.

One day, my teacher told us to write a story about challenges for the school newspaper. It was a big challenge for me to think what to write.

I sat at my desk and thought what to write. I wrote and erased, wrote and erased. I crumpled up the paper and threw it out. I asked my mother, my father, my brothers, and my sisters for ideas, but they could not help me.

The deadline for the assignment was getting closer and closer, and I still had nothing. I wanted to write a story, but I did not even know where to start.

The night before the assignment was due, I stayed up late thinking. Finally, my mother said that I should go to sleep. I had no choice, and so I went to bed.

I realized that the next day, I would have no story about a challenge…

Warning: The following post may exceed the recommended daily allowance for parental boasting. Proceed at your own risk.

What with Yom HaAtzma’ut and even Pesach Sheni behind us, it’s just a matter of days before Lag BaOmer arrives in all its flaming, sooty, and incomprehensible glory.

For those just tuning in, Lag BaOmer, aka “the Night of the Tightly Sealed Windows,” consistently ranks (at least for adults) alongside Chodesh Irgun at the very top of the annual “what time of year do you dread the most” poll.

But while there’s absolutely nothing one can do to prevent Lag BaOmer from happening, one CAN turn to the time-honored traditions of avoidance and denial in a desperate attempt at mitigating some of its inherent unpleasantness.

To this end – and with your indulgence, of course - I’d like to take a few minutes to remind myself that being the Anglo parent of Israeli offspring isn’t always about heaps of smoke-infused laundry and enough stockpiled wood to light up, well, a small country…

After all, upon occasion, those very same Israeli offspring have a habit of accomplishing some pretty amazing things.

(Yes, this is where the aforementioned parental bragging begins…)

For instance, as you may recall, a few months ago I featured a poster that a certain Shiputzim daughter had skillfully drawn for her Mishnah class.

Recently, she had to make another project for the same class, and this time, she chose to make a diorama about Bava Metzia 2:9, which asks, “what is an aveidah (a lost item)?” 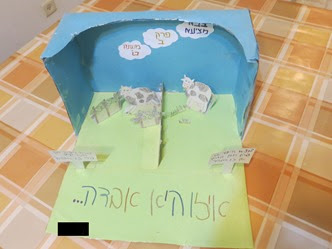 As you can see in the following pictures, the right side represents a case which isn’t considered to be an aveidah (“one who found a donkey or a cow grazing along the road”), and the left side depicts an example of something that IS an aveidah (“a cow runs among the vineyards”): 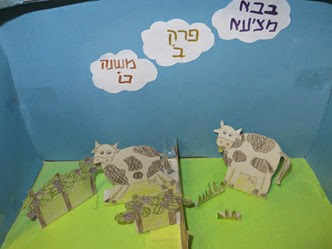 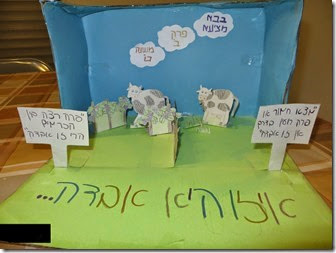 As always, please click on the pictures for a much better view.

What is your preferred method for dealing with Lag BaOmer’s nuisances?

A Tale of Two Moments

OS (=Our Soldier) stands at attention in one of Israel’s military cemeteries.

Although he’s wearing his dress army uniform, a scraggly mustache and beard obscure part of his face. Normally, this would be against military regulations.

But today, no one minds. In the IDF, the Jewish army, religious soldiers are exempt from shaving during the Sefirat HaOmer period.

As the siren wails, OS looks down solemnly at the grave of his former elementary school classmate, a hero who was killed while defending Eretz Yisrael and Am Yisrael.

T. stands a few feet away. He too was one of OS’s former classmates. The night before, T. appeared on national television. An officer cadet, he was chosen to be part of the honor guard participating in the Yom HaZikaron torch-lighting ceremony at the Kotel.

The entire Shiputzim family – including OS, who’s home on a short leave for the holiday - is driving along Kvish 6, the Trans-Israel Highway, on the way to the gorgeous Shomron for a wonderful BBQ (i.e. a mangal or al ha’eish, for the Hebraically-oriented amongst you) replete with great food and great company.

Kvish 6 is a marvel of Israeli engineering and ingenuity. A toll-road without any toll booths to impede traffic or serve as ugly blots on the scenery, its tunnels blend seamlessly into the Biblical landscape.

The Israeli flag attached to the car window whips merrily in the wind. Blue and white flags lining the side of the highway wave back, and electronic signs wish the travelers a happy Yom HaAtzma’ut.

Inside the car, the usual sibling squabbles (“He’s looking at me!” “She’s touching me!”) are surprisingly absent.

Perhaps the lull in the hostilities is due to the fact that everyone is simply enjoying the rare family outing. After all, in recent years, there have been very few occasions when the entire family was home and able to go on trips.

Or perhaps it’s because the Chidon HaTanach (the International Bible Quiz) is playing on the radio. Like most Israelis, the Shiputzim family has a close connection to at least one of the young contestants, and watching or, as in this case, listening to the Chidon is a cherished Yom HaAtzma’ut tradition. 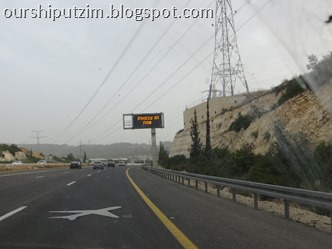 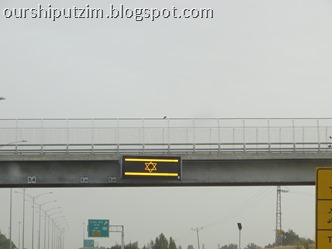 Kvish 6 – Yom HaAtzma’ut 5774 (As always, please click on the pictures for a much better view.)

What small yet meaningful moments defined Yom HaZikaron/Yom HaAtzma’ut 5774 for you?

In just a few minutes, the siren will once again wail and the country will once again come to a standstill, as Israel remembers and mourns each of her 23,169 fallen soldiers and victims of terror.

Here is that prayer, followed by an English translation*:

“O God, full of mercy, Who dwells in the Heavens, deliver proper rest on the wings of the Divine Presence, in the ascents of the holy, the pure, and the courageous, who shine like the radiance of the firmament, to the holy souls who fought in all of Israel’s battles, in the Underground and in the Israel Defense Forces, and who fell in their wars and gave their lives to sanctify Hashem’s Name, the nation, and the Land, because we pray for their souls’ ascent.

“Therefore, may the Master of Mercy shelter them in the shelter of His wings for eternity, and may He bind their souls in the bonds of life. Hashem is their heritage; their rest is in the Garden of Eden. And may they rest in peace on their resting places, and may their merit stand for all of Israel, and may they stand for their fate at the end of days. And we shall say: Amen.”

*The above translation is courtesy of the official Our Shiputzim Hebrew-English translator. For more information, please contact me at OurShiputzim at gmail dot com, and I’ll gladly forward all serious inquiries to her.

As veteran Our Shiputzim readers know, Flag Friday (i.e. the first Friday after Rosh Chodesh Iyar) is the day we here in TRLEOOB* decorate the house and car in honor of Yom HaAtzma’ut.

This year Prime Minister Netanyahu decided to get in on all the fun:

Have you put up your flags yet?