Think of it as an amendment to the original rule.

You see, according to the highly-acclaimed Our Shiputzim General Theory of Pesach Cleaning, now is the time for Stage II:

“Talking and blogging about cleaning in lieu of doing anything constructive.”

But seeing as this stage is essentially all about avoidance and denial, I would posit that an even better way to accomplish this goal is to ignore Pesach preparations altogether and, instead, to turn one’s attention to possible chol hamo’ed activities.

With that in mind – and with your permission, of course – I’d like to recommend a visit to the Ashdod port.

But during most of the year, the Ashdod port is only open to schools and other large groups. However, during chol hamo’ed, families are welcome. [Note: Advance reservations are required.]

We were there on Succot (as you can see, it took me a while to get around to writing this post…), but I believe that the Pesach tours work the same way.

Seeing as there were no small children in our own group, we were very glad that kids under nine years old were not allowed (this rule is strictly enforced), because it meant that the tour was geared for adults and older kids.

The tour lasted about 1½ hours and was divided into two parts: a tour of the visitors center (where they have a few exhibits about the port’s history and operations, a couple of interesting audio-visual presentations, and several educational games) and a fascinating bus ride around the port itself.

IMHO, it is the latter that makes the Ashdod port well-worth the trip.

At one point, we found ourselves parked right next to a large ship, and we got to watch as the ship’s cargo was first unloaded and then reloaded.

Before I show you the threatened promised photos, I should explain that due to security concerns, visitors are only permitted to take pictures from outside the port’s perimeter, from inside the visitors center, or from a nearby scenic overlook known as Givat Yonah (literally, Jonah’s Hill – supposedly the burial site of Yonah HaNavi).

As always, please feel free to click on the pictures for a much better view: 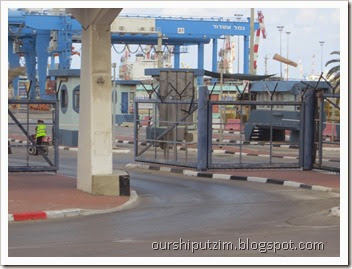 The entrance to the port 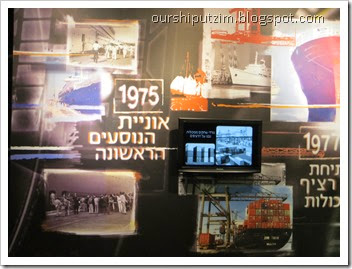 A view from inside the visitor center 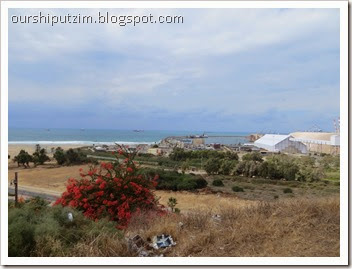 A view of the manmade breakwater from Givat Yonah 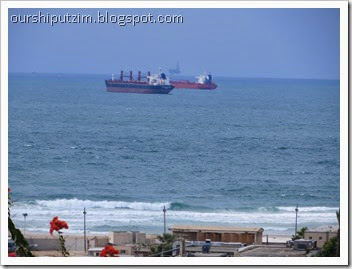 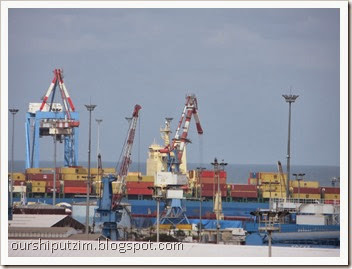 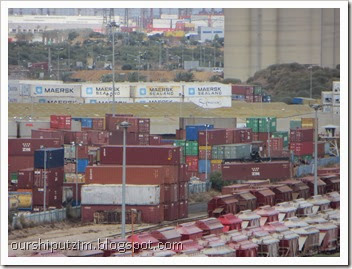 In short, we all (yes, including the teenagers!) really enjoyed our visit to the Ashdod port. The tour guide was extremely knowledgeable; getting to watch the port in action was quite thrilling; and we learned a lot.

I don’t know if it’s too late to make reservations for Pesach, but if not, I highly recommend that you do.

Have you ever been to the Ashdod port?

Heblishization of the Megilah IV

Since it wouldn’t be Purim here at Our Shiputzim without a healthy dose of Heblish, the Our Shiputzim Editorial Board and OOOFNHS (=one of our favorite native Heblish speakers) once again proudly present:

(1) And the King Achashveirosh put a mas on the land and the islands of the ocean.

(2) And all the action of his attacking and his gevurah and the parsha of the bigness of Mordechai, that the king made him bigger: halo, they are written on the book of the things of the days to the kings of Madai and Paras.

(3) Because Mordechai the Jew is second to the King Achashveirosh and big to the Jews and ratzui to most of his brothers; he doreishes good to his nation, and he talks peace to all his zera.

P.S. In case you missed them, be sure to check out the Heblish translations of Esther 3, Esther 5, Esther 7, and Mah Nishtanah.

In a stunning display of hypocrisy, inconsideration (schools and businesses across Yerushalayim were forced to close early, and thousands upon thousands of Israeli citizens were greatly inconvenienced), vindictiveness ("you push us, we'll push back," a chareidi MK reportedly said about his fellow religious Jews), ingratitude, and baseless hatred, chareidi MKs and community activists organized a mass rally/protest against military/national service today.

1) Serving in the IDF is a mitzvah. Period.

2) Of course, learning Torah is a mitzvah too. But that’s just one of the many reasons that - as Shiputzim family friend David Weinberg explains - the recent spate of attacks on the hesder program is particularly shocking.

3) Much of what is being said about the IDF and religious soldiers can best be described as misrepresentations, slander, and outright lies.

4) As Rav Natan Slifkin writes, many feel that those behind today’s demonstration do not seem to care about Am Yisrael as a whole.

May we all be privileged to remember that “kol Yisrael areivim zeh l’zeh” (literally, “all of Israel are guarantors for each other”), and may we soon enjoy besurot tovot, yeshu’ot v’nechamot (good tidings, salvation, and consolation) for Am Yisrael, Eretz Yisrael, and Torat Yisrael, speedily and in our days.