For me, blogging usually serves as an escape from real life.

But sometimes, real life has a nasty way of intruding on the microcosm known as the J-Blogosphere.

Yet, this isn’t too surprising – considering that the J-Blogosphere is actually made up of real people, many of whom I now consider to be my real friends (whether or not we’ve met in person).

Like countless people around the globe, I feel as if I “knew” RivkA z”l from her blog, even though YZG and I were only privileged to meet  her in person one time – at the bloggers’ picnic she organized during Succot 5770.

As a matter of fact, this picnic was a perfect illustration of RivkA’s incredible bravery, warmth, exuberance, and optimism.

You see, in the wake of the previous summer’s J-Bloggers Convention, a few of us had discussed arranging an informal get-together. In lieu of sessions, lectures, or workshops, we were looking for a chance to sit around and schmooze.

We all agreed that such an idea would be great and that we really “should” arrange something. But the new school year was starting, and then the chagim were rapidly approaching…

Let’s put the plan on hold for now, everyone said. Maybe we’ll think about it in November or so.

Everyone, that is, except RivkA.

Then at the event itself, she greeted each participant with her trademark radiant smile and made us feel like we had been friends forever.

And when it was time to leave, she asked simply, “Can I give you a hug?”

Because, of course, that’s what friends do…

May RivkA’s beautiful family be comforted among the mourners of Tzion and Yerushalayim.

Longtime readers know that we here at Our Shiputzim pride ourselves on our commitment to delivering hard-hitting exposés on topical issues affecting our communities.

{ignores the snickering and the snide remarks}

Whether it’s worrisome trends like transparent wrapping paper or troubling developments such as winged chupahs, we’re on the case.

But all of these pale in comparison to the absurd so-called maps provided by simchah halls around the country.

Indeed, any resemblance between real maps and these highly inaccurate and extremely misleading sketches is purely coincidental.

After all, consider the following:

And thus, as a result of innocently relying on one of these alleged “maps”, many guests often get hopelessly lost on their way to the affair.

Maybe this explains why Israeli smachot rarely start on time….

* On a related note, can you believe that the first “Back to the Future” movie is now celebrating its twenty-fifth anniversary??!!

Prompted by a comment on my skink post, YZG took finger to keyboard and surprised me with a, um, literary masterpiece.

I’m reposting it here for those who may have missed it:

(With apologies to Dr. Seuss)

I didn't want to move or blink,
For it was sitting there on the brink.
I don’t know what others think,
But I was all tickled pink.
There's a skink in the sink!

From my duty I could not shrink,
Though I be a mere gink.
So, hands together all in sync,
Careful to make not even a plink,
I grabbed him faster than a wink.

For a sink was no place for a skink.
He deserved his own rink.
Parts of the small enclosure I did link,
For the goal was worth all the swink.

It had to be safe from even a flying chewink,
Safe from the ground from roving mink.
When all was done, we had a drink,
Our glasses together we did clink.

Labeled carefully, clearly in ink,
We announced the rink opening, without making a stink.

For the opening, the skink, he did prink,
And everything went well, without a kink.
The rink endures without a chink,
To find it and visit, just search for the link.

1.  Win a free cookbook! A number of my friends are running giveaway contests on their blogs, including Miriyummy, Batya, G6, Kallah Magazine, Mother in Israel, and Jennifer. Why not try your luck and see if you can be one of the lucky winners?

2. Please continue to daven for RivkA bat Teirtzel. (Some of you may remember that RivkA – and her beautiful, beaming smile - initiated, planned, and organized last year’s wonderful J-bloggers’ Succot picnic.)

At the risk of this blog developing into something which could easily be subtitled, “all lizards - all the time,” here’s a, um, a, er, {quickly asks YZG to reconfirm the unfamiliar name}, oh, right, a skink – i.e. a chomet (חומט) for the Hebraically-oriented among you: 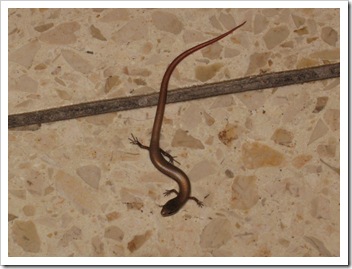 Feel free to click on the picture for a closer view --– if you’re into creepy-looking, snake-like lizards, that is…

Note that this is the third – yes, the THIRD! – lizard to appear on Our Shiputzim. (The chameleon and the agama being the other two, of course.)

Which is strange enough in its own right.

After all, “four-legged reptiles with scaly skin and long tapering tails” (to quote Babylon’s definition) aren’t normally the first things to come to mind when thinking about the J-Blogosphere.

But what makes this particularly funny is that as those who know me in real life are well-aware, I am SO not the type to feature reptiles - or wildlife in general, for that matter – on my blog.

And that’s where YZG comes in.

You see, while I was always the little girl who remained safely outside the animal enclosures at family trips to places like petting zoos, YZG was the boy who spent his summers catching frogs, snakes, and salamanders.

The explanation should be fairly obvious…

One hundred and five percent? 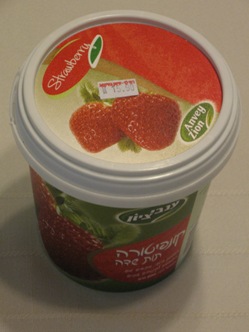 But a closer look at the label reveals a curious factoid: 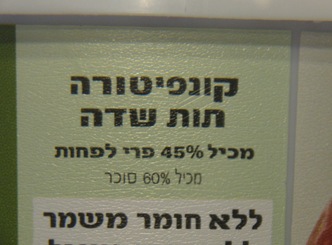 Apparently someone hasn’t quite mastered the idea of percentages.

Perhaps the following classic from Square One TV can help: 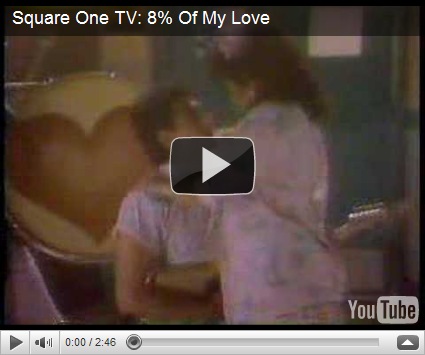 Although the quality of the video leaves something to be desired, the song itself is still as awesome as ever…

Any other Square One fans out there?

The latest Haveil Havalim is available here. Special thanks to Cosmic X for including my newest Heblish post.

And on a related note, please don’t forget to submit your favorite Heblishisms – either in the comment section or to the email address listed towards the top of the sidebar on the right.

This post is neither “fresh”, “baked”, nor [written on] “Friday”. Discuss amongst yourselves. Or, alternatively, you may explain, in 100 words or less, “Why Short Winter Fridays Are Not Conducive To Blogging”…

I find that when replacing the margarine in cookie and cake recipes, substituting 2/3 to ¾ the specified amount in oil usually works.

“Usually” being the operative word, of course, but IMHO, the following moist and easy marble cake recipe adheres to the general rule: 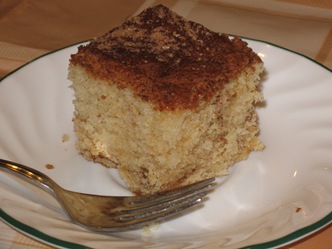 Beat oil and sugar. Add eggs, one at a time. Add vanilla and water. Mix in flour and baking powder. Add whip.

Place half the batter in a greased or baking-paper-lined 9x13 pan.

Pour the remaining batter into the pan, and then cover with remaining topping. Use a knife to make a marble pattern on top.

Yet (with one exception), most of the entries appearing in the Official Our Shiputzim Heblish-English Dictionary to-date have come exclusively from the dialect used here in TRLEOOB (=the real life equivalent of our blog).

Now, however, that’s about to change.

After all, as the following excellent reader-submitted (thank you, readers!) examples show, Heblish  is the tie that binds every Anglo home in Israel.

From Mother in Israel:

Thanks, everybody, and please keep those wonderful Heblishisms  coming!

For instance, Rafi G. has a related halachic ruling, and Jameel shares a fond memory.

But as YZG observed, the date’s real significance is that it serves as a welcome respite for the harried and hassled new oleh.

After all, until the clock strikes midnight tonight, s/he can write checks and affix his/her signature to important documents without the pressure of having to remember that in Israel, the day PRECEDES the month…

1. The latest Kosher Cooking Carnival is available here. Special thanks to Batya for including my savory sweet potato kugel post.

2. The latest Haveil Havalim is available here. Special thanks to Phyllis for including my Apollonia National Park post.

Fauna Friday fans (try saying that five times fast) will no doubt be, um, fascinated to find out that there’s more to Apollonia National Park than inanimate stones and ancient ruins.

After all, during our recent visit, we observed a common lizard a roughtail rock agama (i.e. a chardon matzu’i for the Hebraically-oriented amongst you) basking in the sun.

As always, feel free to click on the pictures for a better view: 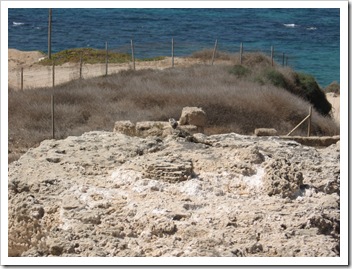 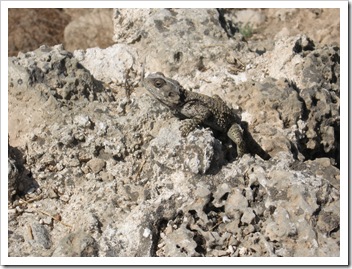 A face only a cold-blooded ectothermic mother could love…

Also known as a star lizard or a stellion, the agama thus joins the chameleon and the tortoise in the hallowed fraternity of reptiles which have been featured on Our Shiputzim.

I hope it appreciates the honor…

Needless to say, during Chol Hamo’ed Succot, we visited (surprise, surprise) yet another national park.

Apollonia National Park, situated on a seaside cliff in the coastal plain, contains the ruins of a Crusader town and fortress.

In 1265, the Mamluks captured the site – then known as Arsur (Apollonia was the name used during the earlier Greek, Roman and Byzantine periods) – after a forty-day siege and destroyed it.

First, the requisite shot of the price list – to show how much money we saved due to our Parks Authority membership: 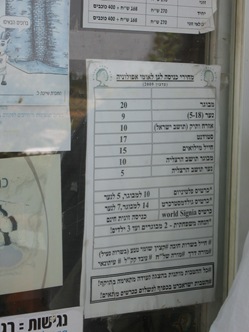 Next, a view of the Crusader town: 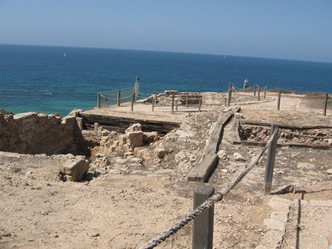 A model of the fortress, with the ruins in the background: 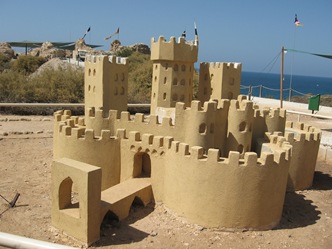 An archway from the fortress’s main tower: 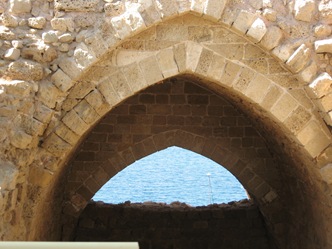 Remains of the fortress: 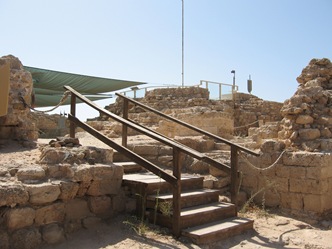 The view from the top of the tower: 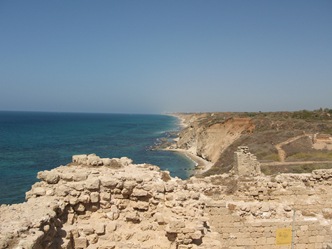 A view of the sea (the Crusader port is now underwater): 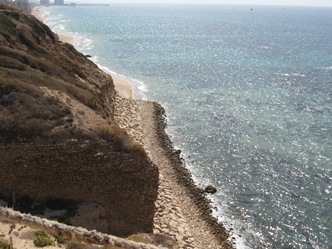 All in all, we had a wonderful time.

There were special activities for Chol Hamo’ed; the scenery was gorgeous; and due to the nice breeze from the water, we had a very pleasant lunch in our portable succah.

{coughs loudly and not too discreetly}

You can wake up now.

I’ve come to the end of the pictures.

That is, at least until our next family vacation IY”H…