Fatigued Friday is an annual Our Shiputzim tradition, which basically involves me writing a post on the day we “spring forward”.

Not coincidentally,  this also happens to be a day when most of the country is sleep-deprived.

A day when exhaustion abounds, and hilarity ensues.

The Top Five Signs That Pesach Might Be Coming Soon

(5) The males in your family are in desperate need of haircuts.

Note that this overgrown state of the hair, er, I mean, affairs has been in effect for several weeks now – and is only exacerbated by said males’ reluctance to use a comb  - but all your attempts at convincing them to remedy the hirsute situation have been met with variations of the following response:

“It doesn’t shaveh to get a haircut NOW. I’ll wait until much closer to Pesach/Sefirah…”

(4) Your local email list is inundated with free giveaways and with advertisements from preteens running day camps during Pesach vacation.

(2) Your menus have been getting stranger and stranger, as you try to find new and creative ways to use up your chametz. ({flips through cookbook} “There has GOT to be at least ONE recipe in here that calls for ¾ cup flour, ½ cup oatmeal, four packages of whole-wheat crackers, and several bags of pasta…”)

Heblish: Plenty more where that came from edition

“You’ve run out of Heblish, haven’t you?” a reader recently observed.

After all, s/he noted, it’s been a while since I posted a batch of entries from the Official Our Shiputzim Heblish-English Dictionary.

Besides, s/he added, a couple of the newer Heblish editions were comprised entirely of reader submissions*.

And so, in response and in order to prove that Heblish actually approaches infinity, I present several all-new entries - straight from TRLEOOB (=the real life equivalent of our blog):

I rest my case…

*Speaking of reader submissions, I still have a bunch waiting to be posted. Thanks to everyone who sent me their favorite Heblishisms, and please keep them coming…

1) B”H, we enjoyed a wonderful, joyous Purim, including a beautiful seudah. Special thanks to the Be-All-You-Can-Be family for their gracious – and delicious! – hospitality.

2) Newer readers will be (no doubt) interested to learn that Mr. Be-All-You-Can-Be is not only the official Our Shiputzim military advisor – What? Your blog doesn’t have a military advisor? You really should get one… – but also served as our tour guide to the wind turbines in the Golan.

Meanwhile, Mrs. Be-All-You-Can-Be is the source for my favorite cheesecake filling recipe.

3) The latest Haveil Havalim is available here. Special thanks to Susan B for including my Heblish translation of Esther 3.

Please feel free to use this highly-effective system yourself…

4) And finally, on a related note, here’s a little seasonal secret for you:

If none of your friends responded to your Facebook status about all the Pesach cleaning you’ve accomplished, you probably shouldn’t take their silence as approval.

Rather, they were raised to believe that if you have nothing nice to say, well, you know the rest…

The Heblishization of the Megilah

In honor of Purim and brought to you by the producers of the now-legendary Heblish translation of Mah Nishtanah, we proudly present:

(1) After these things, the king, Achashveirosh, raised Haman ben Hamdata, the Agagi, and he lifted him up; and he put his chair above all the ministers who were with him.

(2) And all the servants of the king, who are in the gate of the king, are kneeling and bowing to Haman, because so the king commanded to him; and Mordechai will not kneel and will not bow.

(3) And all the servants of the king, who are in the gate of the king, said to Mordechai: “Why are you going over the mitzvah of the king?”

(4) And it was in like their saying to him, day and day, and he did not hear to them; and they told to Haman to see if the words of Mordechai will stand, because he told to them that he is Jewish.

(5) And Haman saw that there is not Mordechai kneeling and bowing to him; and Haman filled with anger.

(8) And Haman said to the king, Achashveirosh: “There is one nation, scattered and separated between the nations in all the states of your kingdom; and their religions are different from every nation, and the religions of the king – they do not do, and to the king it is not worth it to leave them.

(9) “If on the king is good, he will write to lose them; and ten thousand silver traffic circles, I will measure on the hands of the doers of the work to bring to the treasuries of the king.”

(10) And the king took off his ring from on top of his hand; and he gave it to Haman ben Hamdata, the Agagi, the enemy of the Jews.

(11) And the king said to Haman: “The money is given to you; and the nation to do in it like the good in your eyes.”

(13) And books were sent in the hand of the runners to all the states of the king, to destroy, to kill, to lose all the Jews, from teenager and until old man, child and women in one day, in thirteen to month twelve – it is the month of Adar – and their loot to lavoz.

(14) The patshegen of the writing [is] to be given religion in every state and state, revealed to all the nations; to be futures to this day.

(15) The runners went out, being pushed in the word of the king, and the religion was given in Shushan the capital; and the king and Haman sat down to drink, and the city of Shushan became perplexed.

Back in June, when I first wrote about school uniforms (i.e. tilboshet achidah, for the Hebraically-oriented amongst you), I assumed that I’d basically covered (no pun intended) the subject.

But as it turned out, school uniforms proved to be an endless source of blogging material.

For instance, they inspired a dinnertime Heblish post and served as the basis of a pseudo-American post.

In addition, they made a cameo appearance in a binder post and starred in an unintended consequences post.

Not bad for a collection of colorful cotton t-shirts, huh?

And in fact, that’s only the beginning.

Because by the time you finish reading this post, those seemingly-ubiquitous tops will have induced me to add a new entry to the Official Our Shiputzim Adar Lexicon:

(Hint: A quick review of the original Adar post might be helpful at this point. Go ahead and read it. I’ll wait...)

Takanon (תקנון) – Literally, a charter or a set of rules/bylaws. Mainly applicable in elementary schools, it refers to a list of “laws” enacted by the sixth graders (and approved by the administration).

The takanon usually remains in effect for the two weeks between Rosh Chodesh Adar and Purim and includes rules such as:

This year, however, the typical takanon also featured a day when uniforms were not required. (In some schools, the teachers were supposed to “wear” the uniform shirts instead.)

Needless to say, this new edict was a huge hit with  the elementary school crowd, who naturally appreciated the rare chance to pick out their own clothes.

But as far as I’m concerned, the best part of the exercise was that it allowed me to produce an entire post out of, um, whole cloth…

Although she’s extremely busy with Adar-related activities and the bagruyot, the Resident Ulpanistit – and her talented team of adorable assistants BA”H – managed to find time to do some Purim baking: 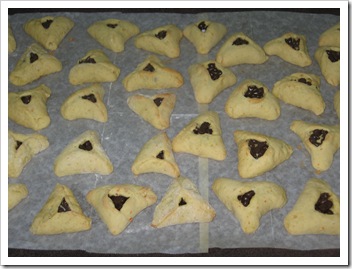 Adapted from this recipe

Grind the orange quarters (yes, including the peels) in the food processor until fine. Add sugar, oil, vanilla, and eggs and mix. Add baking powder and flour and mix until blended.

Let the dough chill in the refrigerator for about twenty minutes before rolling out and forming into hamentashen. (We use copious amounts of chocolate chips for the filling.) Bake at 350 degrees for 13-15 minutes or until done.

Yields: About 45 hamentashen. (They freeze well.)

There is nothing to say.

May we once again be privileged to witness the fulfillment of the Megilah’s words:

“As the days on which the Jews rested from their enemies, and the month which was turned about for them from grief to joy and from mourning to a festival…” (Esther 9:22)

The Maccabeats are now celebrating Purim: 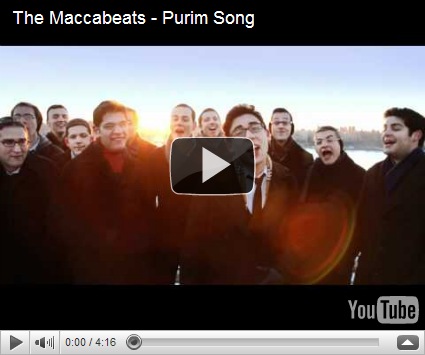 Tell all your friends that you saw it here first…

1) G6 has a beautiful post about her community’s custom of bringing a wimpel to shul. Mazal tov to her and her family!

3) Ilana-Davita visited Dieuleufit – the French village known as the “Oasis of Peace”, because many Jews found refuge there during the Holocaust.

4) The latest Haveil Havalim is available here. Special thanks to Esser Agaroth for including my siddur party post.

5) The V’Nahafoch’hu Kosher Cooking Carnival is available here. (Hint: Be prepared to stand on your head while reading it…) Special thanks to Miriyummy for including the Resident Ulpanistit’s chocolate swirl blondies.

Shavua tov and chodesh tov to all!

In honor of Rosh Chodesh Adar II, we interrupt this blog to bring you yet another one of our family’s favorite obscure songs from the late 1970’s/early 1980’s.

“Shoshi B’Agaf Sheva” (“שושי באגף שבע” – literally, “Shoshi in Ward 7”) was the name of an album recorded inside a Be’er Sheva prison by a group of inmates, including soloist David Shoshi (hence the album’s name).

“Fasuliah” (literally, “beans” or “bean stew” in Arabic) comes from that album: 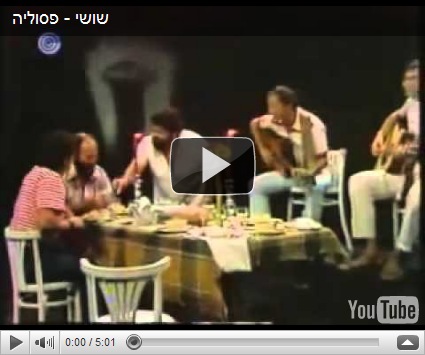 We now return you to your regularly scheduled Our Shiputzim fare of lizards, Chodesh Irgun, citrus fruit, and Heblish*…

*And speaking of Heblish, watch this space for a special Purim edition… 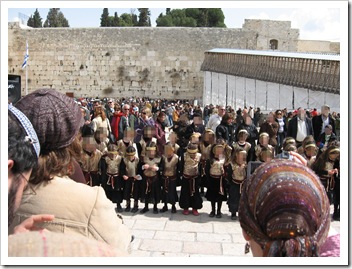 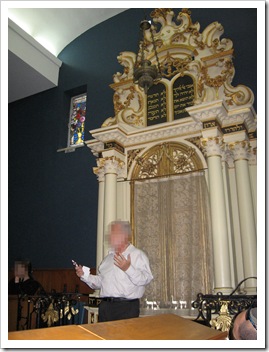 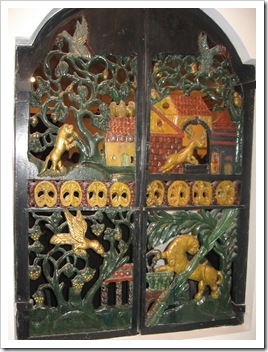 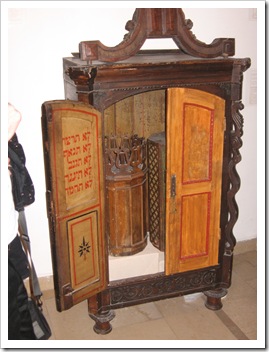 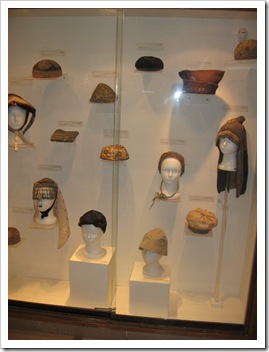 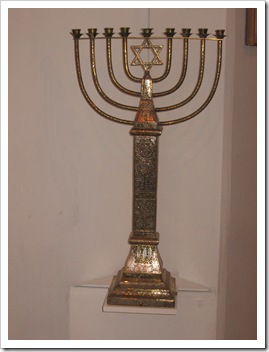 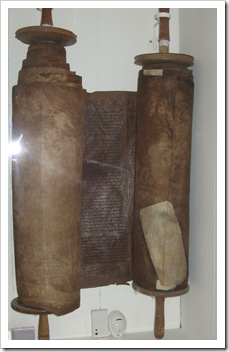