Rather than commenting on the current ceasefire and its political, military, social, historical, or other ramifications, I instead refer you to my Ceasefire Pie post (which referred to the ceasefire at the end of Amud Anan).

Meanwhile, as I wrote in my most recent counteracting the meraglim post, now is the time for all of our dear brothers and sisters in the Diaspora to join us here in Israel and thus help us hasten the Geulah (the Redemption).

And on a related note, the Maccabeats released a new song this week:

Birkat HaGomel at the Kotel

After spending over a month in heavy combat down South and before heading home for a well-deserved break, the IDF’s 51st Golani infantry battalion (which includes many hesder yeshiva students/soldiers and officers) went straight to the Kotel to recite the Birkat HaGomel thanksgiving blessing:

Blessed are You, Hashem our God, King of the Universe, Who bestows kindness upon the unworthy, for He has bestowed every goodness upon me.

The war seems to be back on, and as a result, many IDF soldiers and officers - many of whom had been granted short conditional leaves only yesterday - are now being ordered back to their respective bases.

Which means that all across the country - including here in TRLEOOB*!  – many families are now coming to terms with the fact that their beloved sons won’t be home for Shabbat after all.

But as I wrote in my achdut post, we still have much to celebrate on this Erev Shabbat Nachamu. For in spite of all the disappointments, the heartbreaks, the traumas, and the tragedies of the past two months, Am Yisrael remains united, and people around the world continue to demonstrate their love and support for the IDF.

For instance, a few days ago, OS (=Our Soldier) received a wonderful surprise from my friend Laura (of Pragmatic Attic fame).

She wrote that her young daughter made this beautiful drawing especially for OS, as an expression of her gratitude and appreciation for him and his friends: 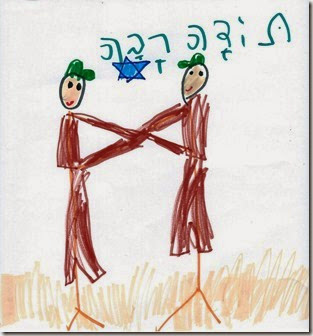 The talented young artist, who graciously gave permission to have her drawing posted here, explained that it’s a picture of two chayalim (soldiers) hugging. “They are hugging,” she added, “because they are happy, and because [I don’t] want them to be sad.”

Thank you, Laura, and please thank your sweet daughter!

The IDF’s Chief Cantor and the Pirchei Yisrael Boys Choir of Givat Shmuel sing the “Mi SheBerach Prayer for the Welfare of the IDF Soldiers” to the tune of “El Eretz Tzvi.” (The IDF Cantor and Choir sang this same song at the Shloshim for the three boys Hy”d last week.)

Shabbat shalom, and may the coming week be filled with besurot tovot, yeshu’ot v’nechamot (good tidings, salvation, and consolation) for Am Yisrael!

Over the years, in the days leading up to Tisha B’Av, it’s become somewhat of an Our Shiputzim tradition* to discuss a different “antidote to the meraglim (the Spies)” – i.e. yet another wonderful aspect of life in our beautiful Land.

Because as our Sages famously taught, the Second Beit HaMikdash was destroyed due to sinat chinam (generally translated as “gratuitous hatred”), and thus, the ultimate antidote to the meraglim is the unprecedented sense of unity that has gripped every sector of Israeli society over the past 7.5 weeks.

We are united in our belief that Tzuk Eitan is a just, necessary, and unavoidable war, and in our knowledge that the IDF is the most moral, ethical, and humane army in the entire world.

We are united in our prayers and support for the brave soldiers and officers of the IDF, who not only risk and sacrifice their own lives to save ours, but who are also – both literally and figuratively - our sons, our daughters, our husbands, our brothers, our sisters, our neighbors, and our dear friends.

We are united in our concern for our beleaguered brothers and sisters in the South, who have spent the last 14 years (!!) living under enemy fire.

We are united in our bewilderment and anger toward those – including many of our self-professed "best friends EVER” – who consistently condemn us for imaginary atrocities while turning a blind eye toward our savage enemies, who cruelly target our civilians while deliberately endangering their own (i.e. a double war crime).

We are united in our outpouring of love for our wounded; in our grief and sorrow over the loss of so many of our best and brightest; and in our condolences to the bereaved families.

And most of all - as I wrote in my previous post - we are united in our awe and gratitude to HaKadosh Baruch Hu and His countless dedicated emissaries for all the goodness that He has bestowed and continues to bestow upon us.

That long list of emissaries includes the three special families: the Yifrachs, the Sha’ars, and the Fraenkels. Their nobility and strength inspired us, and their holy sons HY”D saved us – both physically and spiritually.

In fact, they can be compared to modern-day Esthers and Mordechais. They took a nation that was “מפוזר ומפורד” (“scattered and dispersed” - Esther 3:8) and brought everyone together on the path to salvation. (Esther commands Mordechai, “לך כנוס את כל היהודים” – “Go, assemble all the Jews.” - Esther 4:16)

For instance, a chareidi acquaintance told us that in his [exclusively chareidi] community, people couldn’t stop talking about the three families and their extraordinary emunah (faith). “My neighbors used to think that they had a lock on emunah,” he observed. “But now they all say that they’ve never seen anything even approaching emunah like this!”

Interestingly, the prime minister’s wife used the same word in reference to the wounded IDF soldiers and their families. The TV cameras caught Mrs. Netanyahu in the middle of a long day of visiting different hospitals, and she said that she was amazed at the soldiers’ emunah and their desire to return to their units to finish their missions.

An Israeli neighbor stopped by the other day. After comparing notes about our respective soldier sons, we started talking about the incredible achdut (unity) that we have been experiencing.

“It means that the Geulah (the Redemption) is finally on the way,” she declared. “It’s so close we can almost taste it!”

And so, I turn to you, our beloved family and friends in the Diaspora.

Please join us here in Israel, and come experience this achdut for yourself. Am Yisrael needs you here in Eretz Yisrael, and you need to become part of העם היושב בציון (the Nation that dwells in Tzion).

May we indeed be soon privileged to experience the Geulah, and may our eyes behold Hashem’s return to Tzion with mercy, speedily and in our days. Amen.

Have an easy and meaningful fast.

* Previous “antidote to the meraglim” posts include: