About a year or two after we made aliyah, the Shiputzim Family Legislature (read: YZG and I) enacted an iron-clad ban on driving up North during chol hamo’ed.

Suffice it to say that we had several bad experiences sitting in traffic around Tel Aviv.

Indeed, even after Kvish 6 (the Trans-Israel Highway) opened, we were still wary.

But this year, our determination to hit as many national parks as possible prompted us to bite the bullet and brave the holiday hordes.

And so, first thing one fine chol hamo’ed morning, we set out for Caesarea.

The site’s numerous attractions include the well-preserved ruins (click here to read about the funny thing that happened on the way to the forum amphitheater); a movie about the ancient city’s history; an interactive exhibit where one can “speak” (via computer) to actors portraying many of the historical figures associated with Caesarea; and, of course, the bright blue ocean. 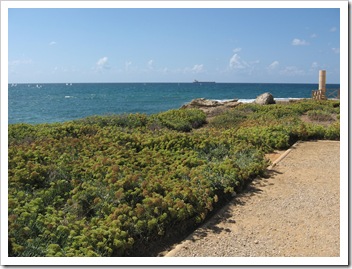 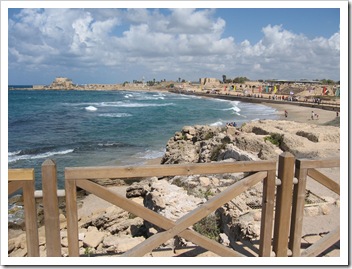 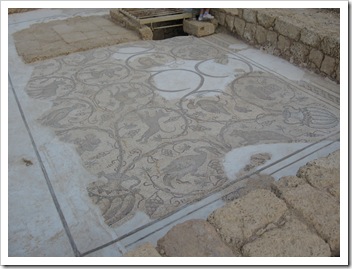 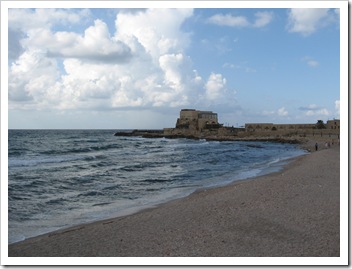 As always, click on the pictures for a closer view.

But, arguably, the highlight was the equestrian show in the remains of the Roman hippodrome.

To say that this show was the height of kitsch is putting it mildly.

First of all, there were riders dressed like Roman soldiers, complete with gaudy red costumes and what looked like brightly colored plastic brooms on their helmets. As these soldiers entered the arena, the loudspeakers blared the “Back to the Future” theme.

Also, the confusing and highly anachronistic storyline involved Herod’s daughter, a traitorous Roman legionary, and even a pirate.

I actually found myself moved to tears.

Because right there, in the middle of the destroyed hippodrome – once the ultimate symbol of the Roman Empire’s might, hegemony, and cruelty – the modern Jewish actors proudly carried an Israeli flag: 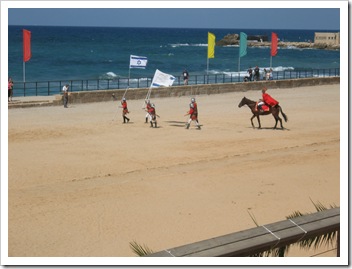 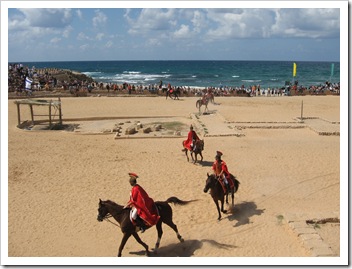 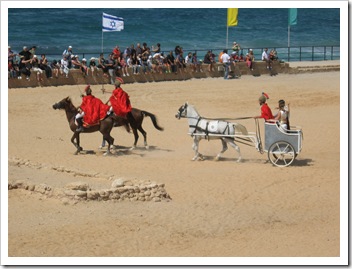