Have succah, will travel

Long time readers may – or may not – recall that last year I wrote about our succah-on-wheels.

As it so happened, we had occasion to use it this year during the course of our chol hamo’ed travels.

Since we keep the schach mat and the wooden slats in the car for the duration of the chag, the mobile succah is very convenient and takes about 30 seconds to construct.

Also, even though only two people fit under the schach at a time, the family members who aren’t halachically-obligated to eat in a succah can sit on the other seats. (When there are more than two post-bar-mitzvah-aged males, they can simply take turns eating.) Thus, the whole family can still eat together.

And best of all, having a travelling succah is extraordinarily cool! :-)

Here’s a view of the succah in action: 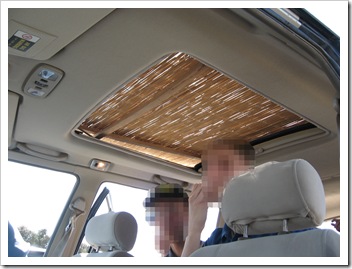 The funny part was that not one of the many passersby said a thing about our unique approach to succah dining. In contrast, when YZG originally assembled it in front of our house two years ago, all our neighbors came out to see YZG’s new “pah-TEHNT” (literally, patent – refers to any creative gadget or workaround).

And on a related note, YZG kindly offered to discuss some of the relevant halachic issues:

Using a car’s sunroof as a succah

I. Size: The succah needs to be at least 7 tfachim by 7 tfachim. Depending on the shitah (halachic opinion), that comes out to between 58x58 cm and 70x70 cm. Thus, our car succah’s width is kosher according to even the most machmir shitah (stringent opinion), and the length is fine according to most shitot.

II. Walls: A succah needs at least three walls. (Note that the third wall can be a partial wall.) The car succah has four walls and makes use of a concept called “dofen akumah” – literally, a "bent wall". This means that the succah’s walls can be as far as 4 amot (up to about 6 feet) from the start of the schach. In other words, the rest of the roof is considered to be a dofen akumah – i.e. part of the walls (since they are all less than 4 amot from the schach).

III. Schach: Since the schach shouldn't rest on something that can be mekabel tumah (like metal), the schach sits on wooden slats (see picture above) rather than directly on the metal of the roof.