Netanyahu’s address to the UN

Here’s Netanyahu’s incredible address to the UN from yesterday: 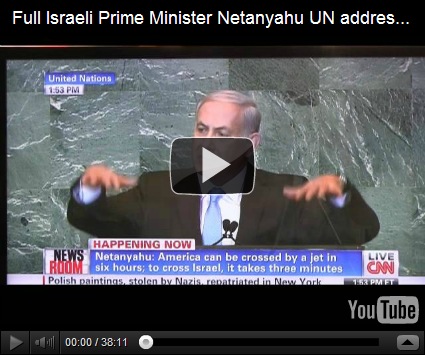 “And I don't think people remember how far we went to achieve this. We uprooted thousands of people from their homes. We pulled children out of -- out of their schools and their kindergartens. We bulldozed synagogues. We even -- we even moved loved ones from their graves. And then, having done all that, we gave the keys of Gaza to President Abbas…

“But ladies and gentlemen, we didn't get peace…”

“…I often hear them accuse Israel of Judaizing Jerusalem. That's like accusing America of Americanizing Washington, or the British of Anglicizing London. You know why we're called ‘Jews’? Because we come from Judea.

“In my office in Jerusalem, there's a -- there's an ancient seal. It's a signet ring of a Jewish official from the time of the Bible. The seal was found right next to the Western Wall, and it dates back 2,700 years, to the time of King Hezekiah. Now, there's a name of the Jewish official inscribed on the ring in Hebrew. His name was Netanyahu. That's my last name. My first name, Benjamin, dates back a thousand years earlier to Benjamin -- Binyamin -- the son of Jacob, who was also known as Israel. Jacob and his 12 sons roamed these same hills of Judea and Samaria 4,000 years ago, and there's been a continuous Jewish presence in the land ever since.

“…Let us realize the vision of Isaiah: ‘העם ההולכים בחושך ראו אור גדול’ - ‘The people who walk in darkness will see a great light.’ Let that light be the light of peace.”