A few months ago, the entire Shiputzim family was into Othello.

But before you get all impressed by our literary and cultural sophistication, I should explain that I’m referring to the classic two-person board game - NOT the famous Shakespearean tragedy.

You see, Othello (aka Reversi) was the subject of MAG’s recent English term paper, and as a result of his research, some of us here in TRLEOOB* picked up a few new tricks –including the highly effective so-called “wall strategy”. (Details available upon request.)

Meanwhile, others used this opportunity to produce a number of intricate designs: 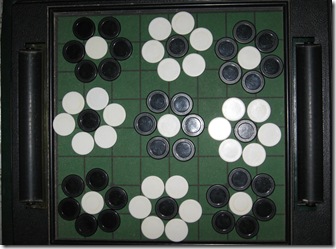 A flowery approach to the game

Even ACGAC** got caught up in the Othello craze.

The basic rules are as follows:

This reminds me of the way occasional blogger YCT would carefully - and quite literally - stack the deck when playing every parent's worst nightmare: the mind-numbingly boring Candy Land.

He thus ensured that his daughter always won, but only after an exciting game with several nail-biting upsets. (He would then leave the deck unshuffled for the next time.)

What approach do you take when playing board games with younger children? Do you let them win? Do you give them some sort of handicap? Or do you believe in tough love - as in, “This is the real world. Deal with it! So what if you’re only two years old…”