Note: I am reposting the following from last year (with a few updates), because I think that the amazing letter at the end should not be missed.

Tonight – the eighth night of Chanukah - marks the yahrzeit of my beloved maternal grandfather z”l, a Holocaust survivor originally from what is now the Ukraine.

Zaidy z”l was the oldest of four sons. His father – who died when Zaidy was only nine years old - was the Rav of their shtetl and the author of several well-regarded seforim. (Sadly, only one of these works – a fascinating treatise on bringing korbanot in our time – survived the Nazi onslaught.) Zaidy’s mother and two youngest brothers Hy”d were murdered by the Nazis and their willing local accomplices in 1941.

A gifted talmid of both Rav Elchanan Wasserman zt”l in the Ohel Torah Yeshiva in Baranovitch and then Rav Aharon Kotler zt”l in the Kletzk Yeshiva (Zaidy z”l was only 17 when he received smichah – rabbinic ordination – from Rav Kotler) before the war, Zaidy z”l later earned an engineering degree from the University of Moscow. 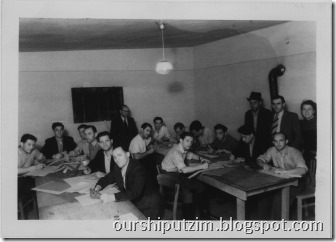 Zaidy z”l (standing, in the hat) teaches other survivors in the DP camp in Frankfurt in 1946.

Throughout his life, learning Torah was Zaidy’s greatest joy, and after a long, hard day working to support his family, he would “unwind” with a sefer. 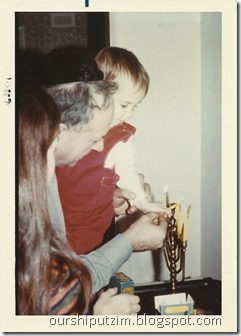 Nine years after the above picture was taken, my family was living in Israel on a sabbatical, when Zaidy z”l suddenly passed away - on Shabbat Zot Chanukah 5740 (December 1979).

Some two weeks later, we received an extraordinary letter (written on an aerogram - remember those??) from him. Apparently, he had dropped it into the mailbox on his way to shul on Erev Shabbat – i.e. just a few hours before he died.

What follows is an incredibly moving excerpt (edited slightly for clarity) from that remarkable letter:

“…With Hashem’s help, our letter will find you all in good health and high spirits. Amen.

“We are, thank Hashem, fine. It is already the 6th day of Chanukah, and usually you are all here. Mommy prepares the pancakes; [REDACTED] takes them sledding in the snow; and we pass out the Chanukah presents to the kids.

“This year, there is no snow yet. The kids and you all are far away in far away places; and the presents for the kids are somewhere; and a mailman will do chores instead of our pleasure.

“But as they say, count your blessings. Thank Hashem for [having] been blessed with children who have chosen to follow in the שביל הזהב (the Golden Path), who are שומרי תורה ומצוות (observe the Torah and the mitzvot) and [are] bringing up their own children to do the same.

“This is the real meaning of מסורה (Jewish tradition) – to transfer the Torah and her commandments as it was given to our forefathers on הר סיני (Mount Sinai), not to add or deduct.

“Let us pray [that] the seeds you are planting will bear fruit. Amen…” 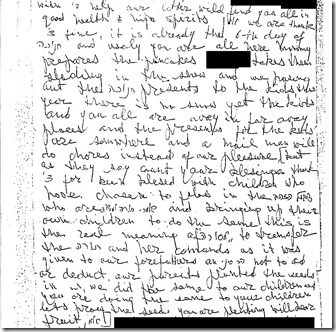