Yesterday, the IDF’s Netzach Yehudah battalion (aka Nachal Chareidi) held an induction ceremony (i.e. a tekes hashba’ah, for the Hebraically-oriented amongst you) in Yerushalayim.

Here’s an incredibly moving look at that ceremony:

Note that as observant Jews, the soldiers are allowed to say “ani matzhir!” (“I declare!”) instead of the more traditional “ani nishba!” (“I swear!”).

This is yet another one of the many ways that the IDF does everything it can to take religious soldiers’ needs into consideration.

May Hashem watch over and protect them and all our beloved chayalim!

Warning: The following post exceeds the recommended daily allowance for vain attempts at making up for one’s prolonged absence with an overwhelming amount of photos. Proceed at your own risk.

As some of you know, we recently celebrated a Shiputzim daughter’s bat mitzvah.

First, she had a small party in school with her friends, and then we had a separate party just for the immediate family.

Here are the threatened promised photos. (As always, feel free to click on the pictures for a better view.)

The bat mitzvah girl chose spring colors for the decorations: 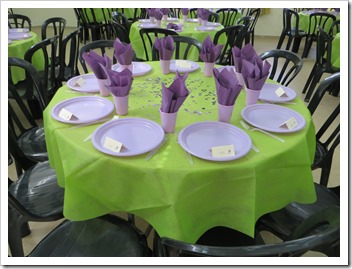 Note the bat-mitzvah-themed confetti sprinkled in the middle of each table: 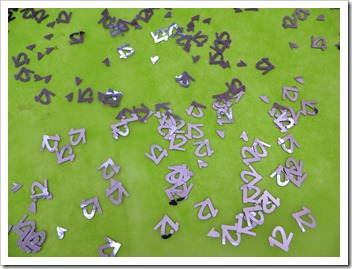 The rolls were made by one of the bat mitzvah girl’s grandmothers (aka “She Who Made the Incredible Bundle-of-Wheat Challah for Shavuot”): 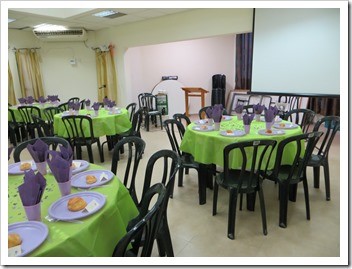 As you can see by the screen in the above picture, the program included the requisite video presentation (i.e. a matzeget, for the Hebraically-oriented among you), expertly prepared by our favorite filmmaker.

The main course consisted of brisket, schnitzel, mushroom rice, carrot bread, and several salads: (Thank you to each of the salad makers!) 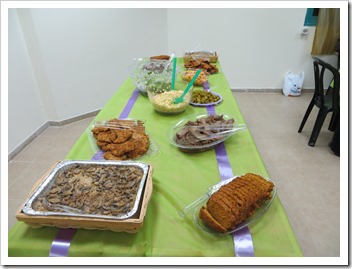 Dessert included a yummy assortment of homemade treats, such as trifle (made by the bat mitzvah girl’s other grandmother): 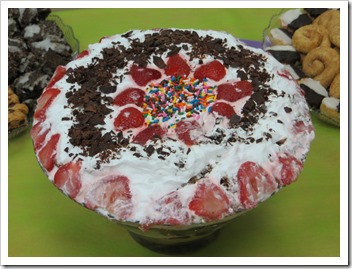 Chocolate cake (courtesy of guest blogger Malke) and French coffee cake (which is neither French nor made with coffee – discuss amongst yourselves - recipe to follow, b”n, in a future post): 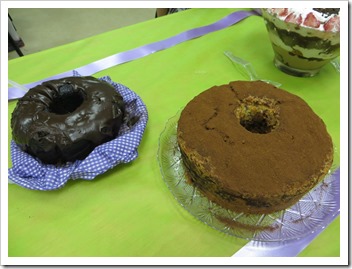 Cookie “pizza” (credit: one of the bat mitzvah girl’s aunts): 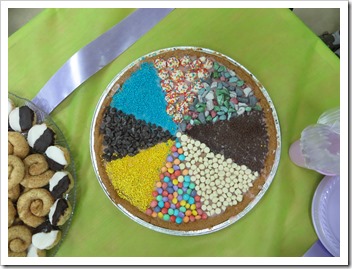 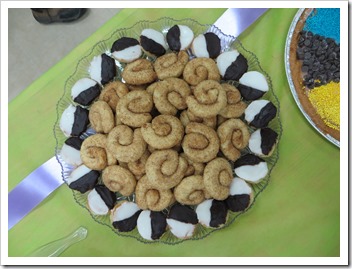 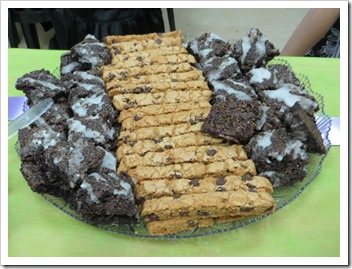 ”No-name” bars (with white glaze instead of colored sprinkles) and more black and white cookies: 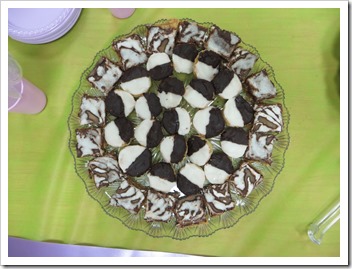 Except where otherwise specified, all the desserts were made by the talented Shiputzim bakers (known here on the blog as the tza’ir bakers) – including the bat mitzvah girl herself.

Mazal tov to the beautiful bat mitzvah girl, who did an amazing job with her dvar Torah!

To continue the previous post’s sheaves of wheat theme, check out the incredible challah that one of our yom tov guests made for Shavuot: 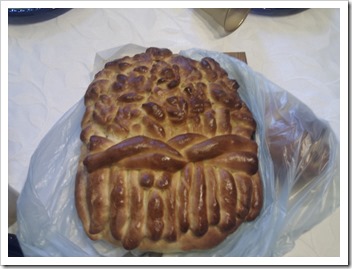 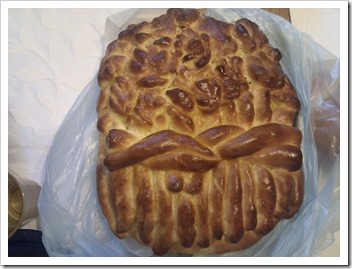 In case you can’t tell - as always, click on the photos for a better view – it was supposed to look like a bundle of wheat.

Thank you, dear Yom Tov Guest! The challah tasted as good as it looked!

Reason #5432 for making aliyah: You know Shavuot – aka Chag HaKatzir - is coming, because you see wheat being harvested in fields along the side of the road. 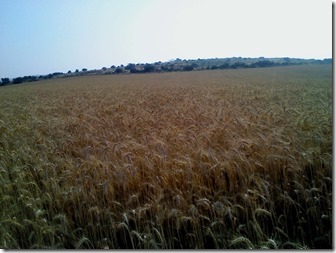 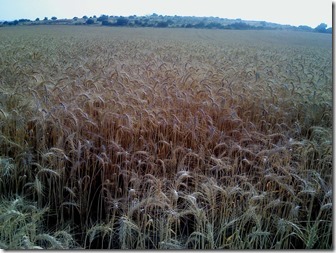 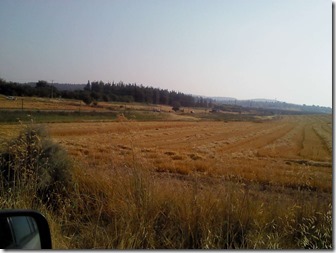 “And she clung to Boaz's maidens to glean until the end of the barley harvest and the wheat harvest...” (Megilat Ruth 2:23)

As you may recall, a few months ago, the J-blogging world collided head-on with the real life world when I had the honor of making my very first shidduch.

Unfortunately, YZG and I were unable to attend the wedding in person. However, thanks to the miracle of Facebook photo sharing and also thanks to the thoughtful Our Shiputzim reader who sent us pictures in real time straight from the chupah, we were very much there in spirit.

Mazal tov to the chatan and kallah and also to their dear parents, grandparents, siblings, aunts, uncles, and cousins!!

The beautiful wedding took place on Lag BaOmer, and what better way to celebrate than with a joyful song. (The video was shot in the area around the soon-to-be former bridge to nowhere.)