As longtime readers are aware, it wouldn’t be Chol Hamoed here in TRLEOOB (=the real life equivalent of our blog) without a trip to one of Israel’s beautiful national parks, and so, on the Wednesday of Chol Hamoed Pesach, we set out for Herodion.

The weather was windy yet clear, and we were thrilled to be joined by Guest Blogger Malke and her family.

Located just outside of Yerushalayim in eastern Gush Etzion, Herodion resembles a truncated cone and dominates the surrounding area. From the top, one can see the Dead Sea and even the mountains beyond.

Herodion was originally built by Herod as a sumptuous palace/fortress, and it boasted the absolute latest in Roman era mod. cons. and amenities - including cisterns, saunas, a theater, and a lavish swimming pool with an island in the middle.

Historians believe that out of all of Herod’s massive construction projects (e.g., renovating the Second Beit HaMikdash, Caesarea, etc.), Herodion was his favorite. After all, it was the only one he named after himself, and it was where he was buried. (The park’s requisite movie focuses on the hours leading up to Herod’s funeral. Apparently, the funeral’s organizers had the foresight to video the proceedings… :-))

Later, during the Great Revolt (66-70 CE - i.e. HaMered HaGadol, for the Hebraically-oriented among you), Herodion served as a base for the Jewish fighters, who were unimpressed by the luxury and added a beit knesset and several mikvaot instead.

Then, during the Bar Kochva Revolt (132-136 CE - i.e. Mered Bar Kochva, for the Hebraically-oriented among you), the fighters dug out a cleverly-engineered network of  tunnels, which today’s visitors are allowed to explore.

And now, without further ado, the threatened promised pictures:

First, the obligatory shot of the price list, to show how much money we saved as a result of our National Parks Authority membership: 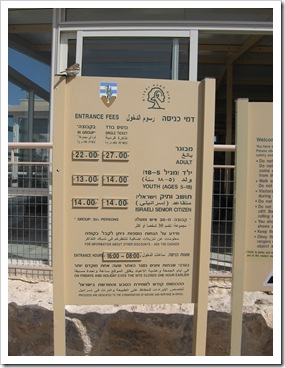 Note the little bird resting on top of the sign.

The view from the fortress: 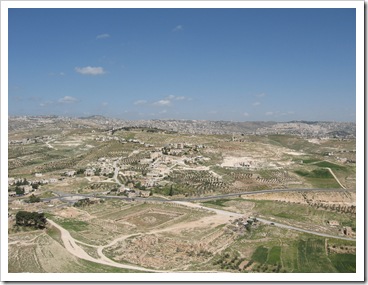 The square with the round thing in the middle in the foreground is the remains of Herod’s swimming pool. 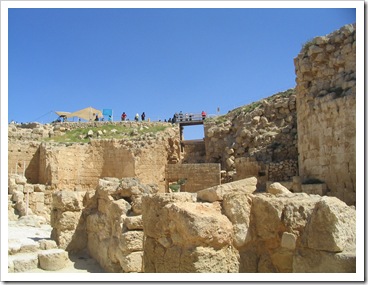 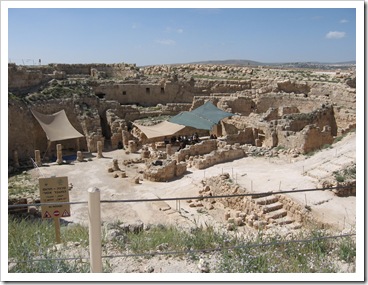 And, finally, inside one of the Bar Kochva tunnels: 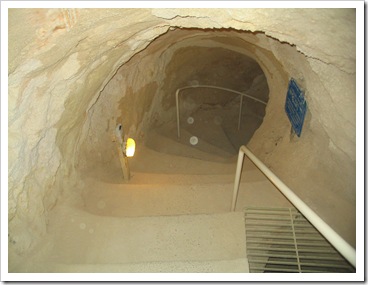 Have you ever been to Herodion?

P.S. Coincidentally, Batya also visited Herodion during Chol Hamoed (although not on the same day as us). Be sure to check out her post.