As the entire country stocks up and braces for last year’s major winter storm – because why shouldn’t we take it for granted that this week’s storm will be an exact copy of the blizzard of December 2013? – now’s probably a good time to take care of some blogging housekeeping by finally sharing some post-Chanukah thoughts.

But first, I hope you all had a wonderful, joyous, and light-filled Chanukah! 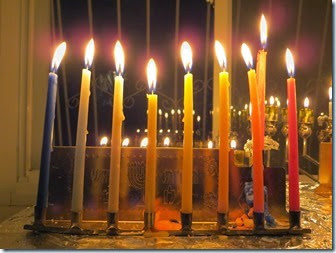 And now without further ado, some post-Chanukah notes:

1) Before he summarily and abruptly resigned, the former education minister decided, for reasons best known to himself, to shorten Chanukah vacation – to the dismay and indignation of schoolchildren across the country.

And since it soon became apparent that the change was – like many of the former minister’s so-called reforms – hastily conceived and poorly implemented, the kids weren’t the only ones who were annoyed.

Because the result was that no two Shiputzim kids had the exact same vacation schedule, and thus, your humble blogger spent much of Chanukah asking, “Remind me again. Who is off tomorrow?”

2) Due to a bit of car trouble (hopefully more about THAT in an upcoming post), we found ourselves homebound more than we originally planned.

But it turned out that our unintended staycation had a silver lining.

With nothing else to do, the younger Shiputzim kids had a chance to watch both “The Princess Bride” and “Singin’ in the Rain,” and now YZG and I can say that we’ve fulfilled two of our essential parental obligations…

Stay safe, warm, and dry, and enjoy the snow!